Like the Haij, the island of Ibiza is a pilgrimage that every serious house music lover must do at least once in their lives. With weekly residencies held by the best dj’s in the business across the island and 5 out of the world’s top 10 clubs within kilometres of each other. There is nowhere else on earth that can provide a clubbing experience like that found on this small Mediterranean island.  With so much to choose from, how do you make sure you’re going to have the best possible time? Well to be honest, it’s very hard to have a bad time in Ibiza. But for me these are the best Ibiza night and day time clubbing options .

I think Ibiza is the only place in the world where getting a VIP table is actually the sensible option. My experience here is based at Pacha .  Pacha is known as one of the more glamorous clubs on the island, however it has a pretty informal vibe too it and it is anything but snooty and stuffy. For the person living under a rock for the last 20 years. Pacha is a Spanish clubbing brand, similar to Ministry of Sound. It began with one of the world’s first super clubs just outside Barcelona in 1967, and then on to Madrid, and throughout Spain. Today you can find Pacha clubs in London, New York, and even in places as exotic as Marrakech and  Sharm El-Sheikh. But the club behind the global domination and the international headquarters is Pacha Ibiza.

If you want a taste of Pacha VIP, you can expect to lighten your wallet by approx  €200 Euro per person. In return you will get: club entry (via the no waiting VIP line), your own table and host (likely one of the most beautiful women in Spain), 1  bottle of spirits (shared between 2 people, so come in an even number) and mixers. Value for money? Probably not, but let’s compare this to the non-VIP way. Entrance via the normal line, can be up to €80 depending on who is playing on the night. Lining up for 30 – 45min isn’t much fun either.  A vodka + mixer at the crowded bar will set you back €15 each. When you add  all that up it is very likely you will be spending €200 regardless. Add in to the fact you have your own reserved table with space to relax and chat,  and a gorgeous host at your disposal to bring you drinks, it quickly becomes obvious that VIP is really the way to go. 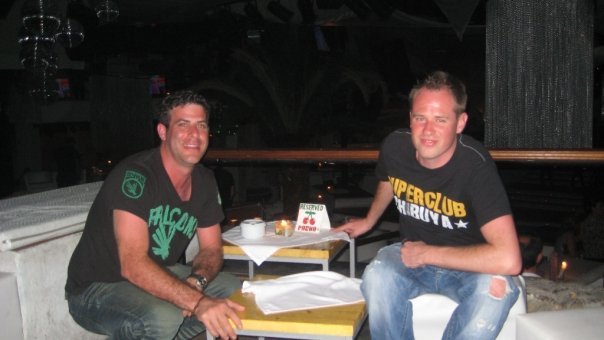 Here is an image of us enjoying VIP very early in the night. As you can see we’re irresponsibly sun burnt.

You will definitely meet some interesting people in Pacha’s VIP. Our neighbour on this night was a Russian guy who claimed to own an international gas pipeline. He had 2 absolutely stunning Lithuanian girls hanging off each of his arm, who he treated horrendously, yet they still showed him plenty of affection (maybe too much affection). I have photos of these guys, but I won’t publish their faces, as I get the feeling this is not someone I want to piss off if it turns out he doesn’t want his photo online.

Keep in mind that the VIP section is upstairs, but your spots will be reserved so you can go down and hit the floor to be part of scenes like these. This is (very) amateur footage I shot when I visited Pacha. The first is some edited highlights. The second about 2 minutes for raw footage with the ice cannons and sirens going off. 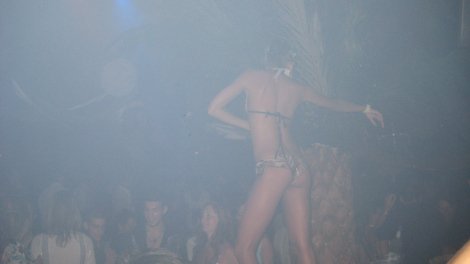 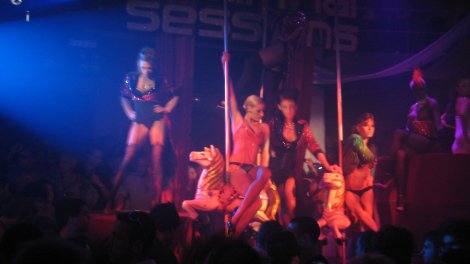 Best of the Day: Beach Clubbing at Bora Bora

There is so much to see and do on “the island” during the day. For example, hire a car and head to the hills for a picnic, go scuba diving or snorkeling, hang out at one of the beautiful beaches or simply read a book poolside. I however thought this was the best time to go clubbing.

Bora Bora is my idea of heaven. You have all the benefits of going to the beach – that is to say warm sunshine, beautiful people (mostly topless), cool turquoise water for a quick dip. Then add in some great house music, and a bar that makes some of the most potent sangria around and you’re all set for one of the best afternoons of your life. 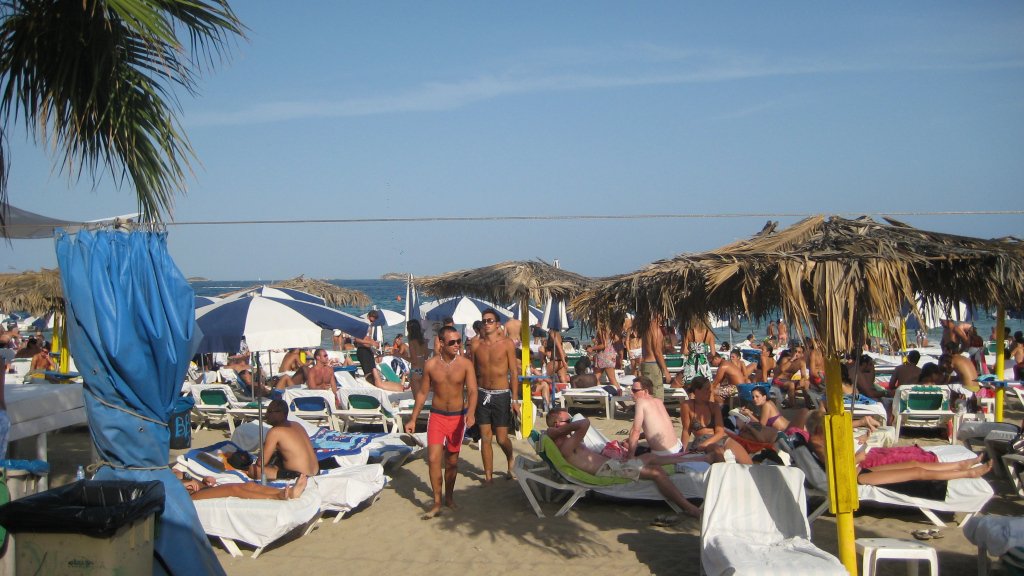 The view from the dance floor 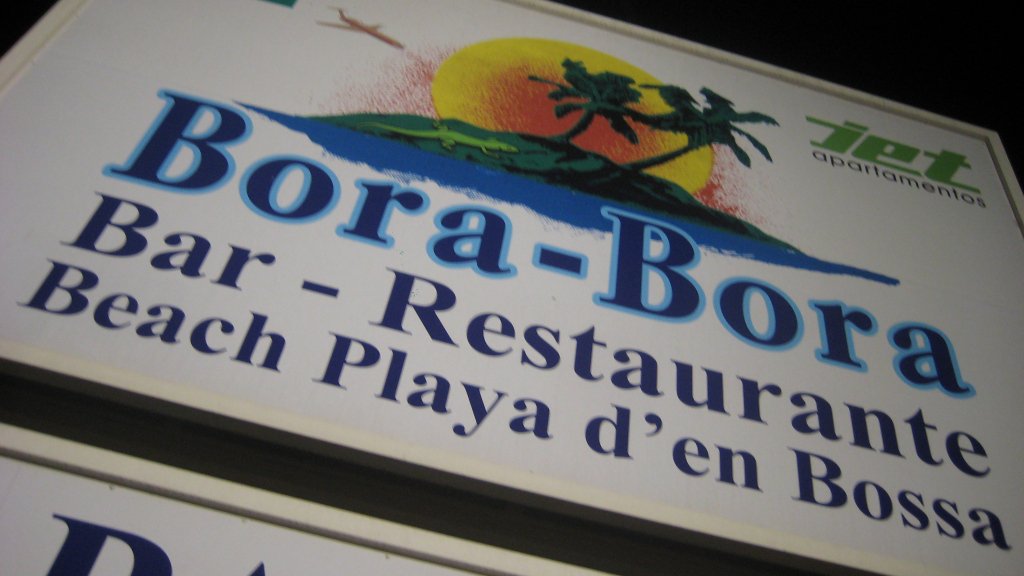 About the time the sun begins to set a curtain is pulled across the beach front and the transformation starts to take place from a summer beach party into a full on night club. The music takes it up a notch and people start to move inside into the covered dancer floor with its lights and mayhem. 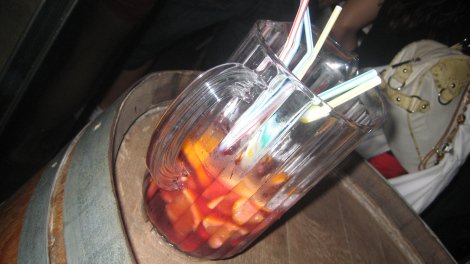 Bora Bora Sangra, most people get a 2L jug for themselves. Even though it’s just for one at least 15 straws are required.

The craziness inside increases as the sun goes down

Hola girls, watch out for guys dry humping you from behind.

Unlike many of the other well known clubs on Ibiza you are unlikely to see the likes of David Guetta, Erick Morillo or Steve Aoki behind the decks, but it does happen from time to time. The focus here is more on creating music that matches the surroundings rather than grabbing a big name to pull in the crowds. People are coming for the location, the atmosphere. People don’t want to be worried they’re missing out on a headline DJ’s set, when they are relaxing on the sand or making some new friends.

One other thing you should know. The bar is right under the flight path, so every few minutes 737’s fly over at low altitude usually to a cheer from the crowd.

Check the website to see who the residents are for when you visit, but David Guetta, Erick Morrillo and the Swedes, usually have their Ibiza residencies here.

To book a VIP table  you will normally find club reps if you hang around on the beach, or you can use a website such as this one.

Bora Bora is located below Jet Apartments in Playa d’en Bossa. Just east of the airport on the southern side of the Island.

Entry is free and it runs daily in summer from early afternoon to 6am. Although you will find it in it’s peak form approx 3pm – 8pm