Despite having some of NSW’s most beautiful beaches and located only  a 2 hour drive or train trip from Sydney. Sydneysiders have traditionally stayed away from a visit to Newcastle. It’s reputation as an industrial city lacking in any culture may have had elements of truth in it years ago. But today Newcastle is thriving with some seriously funky cafes and bars, a very creative and vocal arts scene and the beautiful beaches are still beautiful.   Don’t believe me? Read on and see for yourself.

Whilst living in London and tucked away from Australia, I found out that Lonely Plant had named Newcastle amongst it’s Top 10 cities for 2011. Sitting alongside such amazing travel destinations as New York,  Tel Aviv, Dehli and Valencia. Having parents who grew up in Newcastle I had always spent a bit of time there, but I still struggled to believe this to be true. Sure the beaches were great, but I had always known the city area to be a bit drab, generic and a high proportion of population that placed burnouts and beer as their two favourite things in life. Upon returning to Australia, I had to come back to visit and see exactly what has taken place. So one Sunday afternoon, I jumped in the car, headed up the F3 and spent a pretty amazing 8 hours in Newcastle.

When I was a kid, I used to ride a bike along Darby Street to get to the beach whilst staying at my uncle’s place. I remember there being a few milk bars and the famous (in Newcastle anyway) Darby’s Pie Shop. Flash-forward to 2013 and you have a strip of about 200m with some of the most creatively decked out cafes and bars in Australia. The council has dropped the speedlimit to 40km, making it pedestrian friendly and most of the cafes have set up great little eating areas on the street, as well as converting their backyards into idilic outdoor veranda areas. 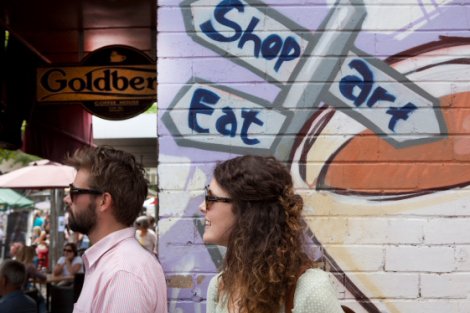 Out choice for a well deserved mid-morning coffee was the Cafe Longbench. It has a kind of surf-club feel to it, plenty of on street seating, they have a small bar inside. (Including beers on tap) and then out the back to a splitl-level purpose build shady veranda area. Service was attentive and friendly by a nice Greek guy who was working in Australia until things improve back home. Coffee was strong and well made. My friend had a chocolate milkshake which was also delightful. The bill was a-alot higher than I expected though ($4.50 for a regular coffee). It appears along with Sydney sophistication comes Sydney prices to match. Also surprising was the posters up advertising live music during the week. I got the feeling this place would become my second lounge room if I happened to live up the road.

The Honeysuckle area is a recent gentrification of a former industrial / docks area. Containing many waterside apartments and office buildings  most of which have restaurants and bars located at their base. Perhaps the jewel in the crown of these is the Honeysuckle Hotel. It is one of the converted old dockside buildings, done tasteful to retain the character and history of its original use, whilst also being a modern state of the art venue as well.

When they say they are waterfront they aren’t kidding. In-fact the front part of the building is on stilts over the harbour, the other good news. The entire waterfront of the building has been dedicated to to a warm and sunny veranda, it even has sealed off smoking areas so you can enjoy the food without smoke drifting across your meal. 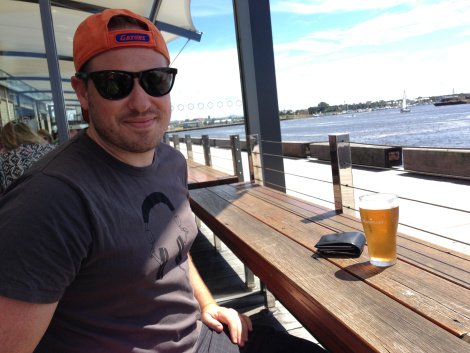 Prices are reasonable, and the Bloody Mary we tried was first class. The bar tender took particular pride in his special recipie which included a double shot of Vodka.

Honeysuckle Hotel is very much a family venue on the weekends, and there was free face-painting for kids when we were there. This also means hyped up screaming kids are likely to be part of the scenery, but the place is rather large you can easily find a nice tucked away area away from them. Weekly specials are part of the fair here, pick your timing right and you’ll get buckets of oysters, prawns or muscles at a very decent price. 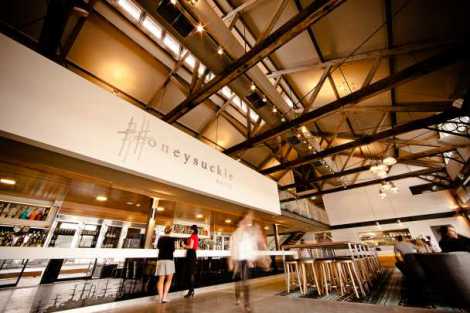 A nice PR shot showing the inside.

There is one venue that has been making waves even outside of Newcastle and that’s the Merewether Surfhouse. This start of the art structure has been built into the steep hill on the southern end of Merewether beach.  You walk in on the top level from the street on top of the hill and straight into the bar. The feeling is quite dynamic as you walk off at street level to all of a sudden being 40m or so above the sand. You do feel as if you are up high in a crows-nest or perhaps a very tall life-guards chair observing to surf below. On a sunday afternoon a DJ is playing some chilled tunes, and there are plenty of sun lounges to choose from out on the deck, or window-side tables and stools undercover if you prefer. 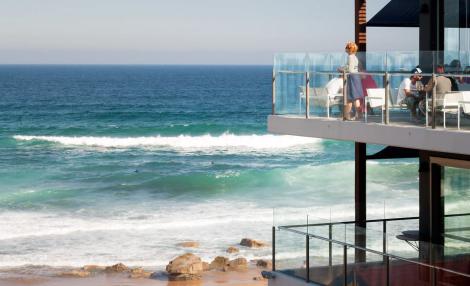 Foodwise we enjoyed some snacks form the bar menu. I got the Margarita Pizza, which for the price was disappointingly small and didn’t appear to be as fresh as it could’ve been. My friend went one of the seafood options which are generally on special (usually prawns or oysters) and I’m assured are much higher quality. Despite this, the friendlyness of the bar staff made up for it, and I could easily see myself sinking a few beers in the sun and devoting a very pleasent afternoon to the place which I would’ve done if I wasn’t driving. 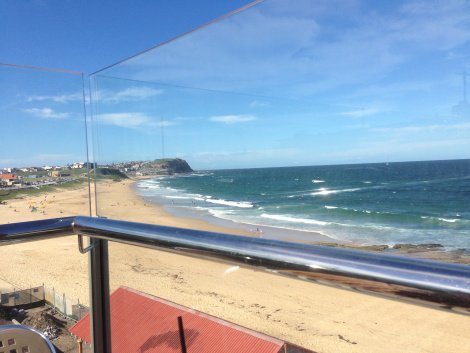 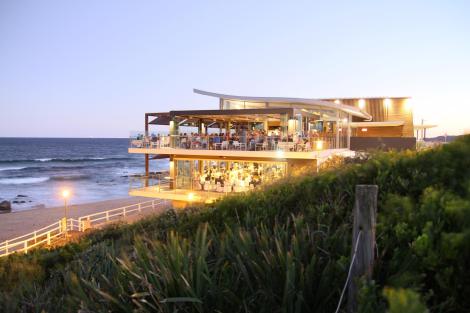 How great does this place look? Credit: Cal Rowston.

Newcastle like many industrial cities around the world hasn’t had the best run as of late, perhaps the biggest knock the city took was when the city’s largest employer,BHP Steel moved, out in 1999. Combine this with the fact that Newcastle has two huge shopping centres where most people do their shopping and the CBD has slowly started to become a less attractive place for businesses and customers. In 2013 this is starting to change. The cheap rents of the CBD has seen a wide range of young and creative businesses move in, giving the city a very young and edgy feel. If you like Surry Hills in Sydney, than you’ll feel right at home in Newcastle’s CBD. With plenty of great cafes, eclectic clothing boutiques, including some vintage options. 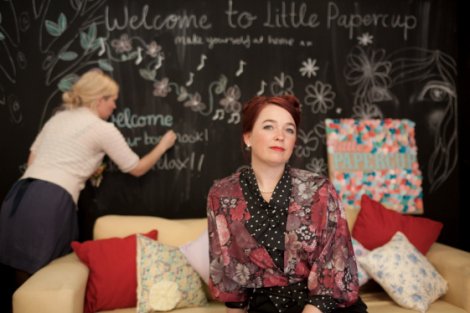 Newcastle’s CBD has seen an influx of creative businesses into the city’s abandoned retail spaces.

Newcastle has more artists per capita than any city in Australia. And we aren’t talking your stale old Divinci stuff either. When you make it to the CBD be sure to also check out some of the numerous artspaces such as The Lock Up – formally Newcastle’s main police station. Instead of crims in residence you will now find artists in residence, as well as regularly rotated exhibitions  Other ones you want to check out are Watt-Space which houses art produced by students from the University of Newcastle. A word of warning, Sunday is still a quiet day in Newcastle and get there earlier than I did at 4pm as most of the cafes were winding down and shops were closed.

All in all I was blown away by my day in Newcastle. Starting with some of the best coffee in one of the best cafe’s I’ve ever been in, right up to drinking beer in the sun either directly above the harbour or a golden sunny beach. The quality of all venues and the effort gone into the presentation of all experiences is as good as what you will find anywhere in Australia or maybe even more. For those travelling up or down the Pacific Highway and giving Newcastle the flick over more traditional tourist destinations, I urge you to rethink your decision, take time to experience Australia’s second oldest city. Your decision will be rewarded. 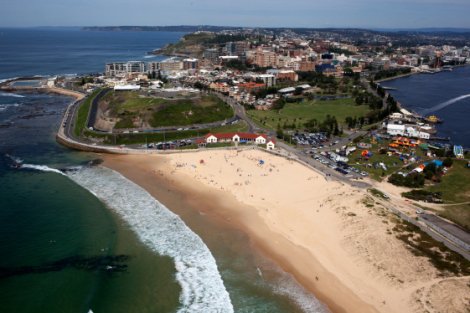