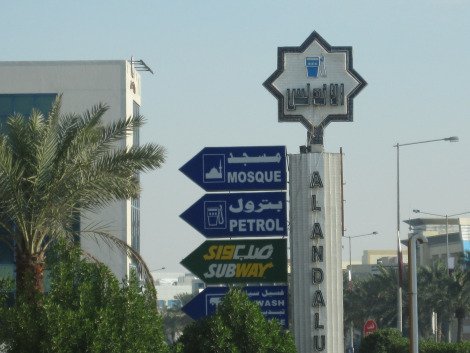 With a city that doubled in population between 2004 and 2010 it can be quite hard to find the old and and authentic Doha. But  if you head to the old souq you can still take a peak at what pre-boom Doha must’ve been like.

If you can imagine Marrakech’s main bazaar but a lot cleaner and more organised then you have a bit of an idea of what the souq is like. Little stores down endless undercover corridors selling whatever you can think of from pet-stores, spices and traditional Arab clothes. 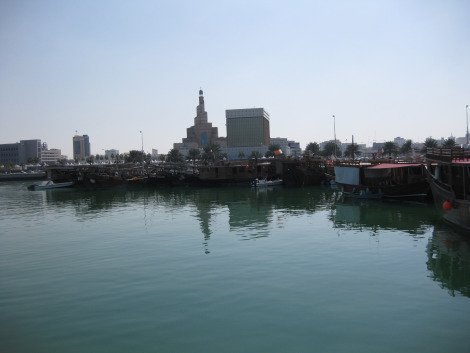 One thing about Qatar is that if you’re a local you don’t have to think too hard about what you’re going to wear. Almost all Qatari men wear a White Jalaba with traditional headdress called a Keffiyeh. And the good news. They are all cheap and here is where you can get them. I did hear that because they are so cheap that some Qatari’s have a new one made to wear everyday. Given how clean and neatly pressed they all appear to be I would not be surprised.

For some reason I wanted to purchase the local outfit. I thought I might get some opposition to this from the shopkeeper, but in actual fact he thought it was fantastic and couldn’t wait to sell me a Keffiyeh believing it to be the ultimate Doha souvineer.

My Keffiyeh purchased at the Old Souq. I only wear it on special occasions.

Part of the Souq has been reconstructed in the traditional style and it’s here where you will find a food street with all sorts of international restaurants including Iraqi, Persian, Lebanese and Moroccan. This area is one of the main entertainment hubs of the city, and the outdoor seats of the restaurants are full of revellers enjoying the mild nights, chatting away whilst sipping on coffee and smoking shisha. One thing that is not immediately obvious until it’s pointed out is that there is not a drop of alcohol to be seen. This area in almost every other city of the world would be full of adults enjoying  a beer outside, or perhaps a group celebrating with champagne. But not in Doha.  Keep in mind that you won’t be enjoying a drop of wine when dinning at some of the country’s best restaurants.

I went for Moroccan and checking out the menu there was plenty of camel dishes to try. Thinking back to a day or two ago, I wondered if any of the camels I met at the camel market where now in pieces in this restaurants cold storage. A thought that quickly saw me decide to choose the lamb.

Architecturally this is one of the most beautiful buildings in Doha, and one of the first culturally significant institutions that the nation has built with it’s newly acquired wealth. Built completely offshore in the Doha Bay, it is accessed by a small bridge from the shore. Inside is, well, lots of art with Arabic script. Personally I was astounded to learn how much older Arabic writing is than Latin writing and the precision that goes into making it. Equally astounding is the architecture of this place, even more astonishing when you consider it’s built completely over water. 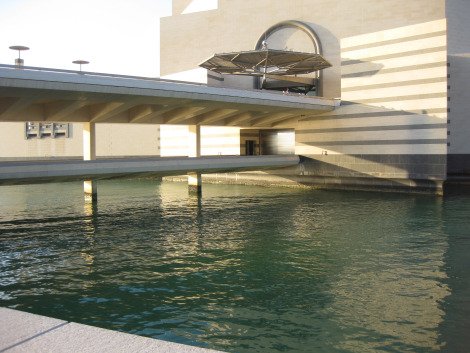 The bridge across to the entrance of the Islamic Museum of Art.

If you are a westerner and not used to a conservative Islamic society there will be a few things that will leave you somewhat confused and feeling a long way from home. If you can appreciate this for what it is, a different way of living then you should cope very well.

Many public places, usually restaurants, have a family only area. This should really mean a “no young men” area. The family only area is designed for families and also ladies to enjoy eating in restaurants without the obnoxious of young men being near them (or so I understand). This is extended to Friday afternoons at shopping malls when single men will be turned away. Westerners are often exempt to this at shopping malls. However it seems to be overly enforced for the sub-continent male population. This is not a good thing as Friday afternoons are often the only time they have off during the week in order to do their grocery shopping. 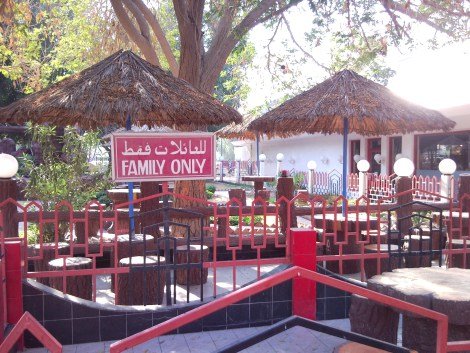 I’m not talking about on street corners in neighbourhoods like churches are in the western world. I’m talking about places like shopping centres and petrol stations as well. The call to prayer five times a day is taken very seriously and as such facilities for people to do so are always close by.

Everything you need in the one place. 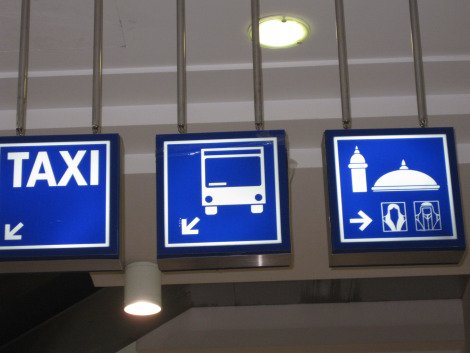 3. Praise to the Emir for everything.

A lot of sucking up goes on the the ruler of the emirate. He gives a lot to his people so giving thanks I think is perfectly acceptable. The sucking up also continues to businesses.  It’s not uncommon to read advertisements in the paper from large corporations praising and thanking the Emir. The perfect example I can think of is was a full page Vodafone ad I saw worded something like “We give praise for the wise Emir for granting Vodafone to operate in Qatar. Through his brilliant leadership we can celebrate 1 year of operations today”  Can you image Vodafone UK doing that for the Queen? Unlikely.

4. Banks with a difference.

Banks in Qatar are usually divided in two with a male entrance and a female entrance. Almost like going to a public toilet. Islamic banks also exist which do not charge interest on loans. Instead of a standard mortgage, they will usually by a property on your behalf, then sell it too you at a higher price.

Qatar is an eye opening place. It’s a country desperate to make its mark on the world stage and they have the funds to do it. Thankfully most of their aspirations are for  the greater good. Hosting the 2022 FIFA world cup is the most obvious example of this. But it also extends to the philanthropic Qatar Foundation (you may have seen it on the jersey of a small football team called Barcelona). The Doha Development Round aimed at lowering trade barriers, and Al Jazeera a news network with the mission of showing a more balanced view of the world.

As if they will win that.. hang on.

Doha, and Qatar is kind of what Dubai would be if it still had its soul. If you’re interested in visiting an Arab country, that is safe, clean and culturally different enough to push you out of your comfort zone (a good thing in my opinion) I suggest you look past the overexposed tricked out cousin to the east (Dubai) and book a ticket to Qatar instead.