NBA Game Time – More B-Ball Than you can Handle 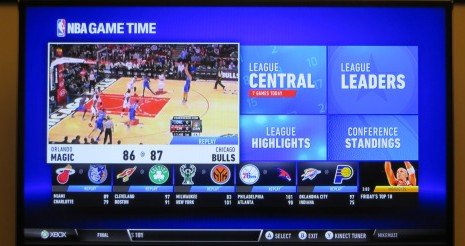 What could be better than every NBA game in HD available live and on demand across all your devices?.. Actually I can think of a bunch of things. But you’ve got to admit the front row access provided by NBA Game Time is pretty amazing.

As a basketball loving kid, growing up in Australia before pay-tv it was actually pretty hard to catch an NBA game. Channel 10 showed the weekly magazine show NBA Action (can’t believe it’s still running) and if we were lucky a game might be broadcast on the weekends. I could not imagine that right now using technology on me,  I can watch ever game of the season via the laptop I’m writing this on now. The phone in my pocket and the tablet doing nothing in my bag.

But perhaps the best way to enjoy NBA Game Time, is on your TV via the Xbox Live App. Not only do you get to watch the games on your HDTV. But add in the options of voice control via Xbox Kinect plus an interative ticker along the bottom of the screen showing live scores and info from other games.Unlike your favourite sports station though, you can turn this off allowing you to view the game fullscreen and uninterrupted or you can press up to call up a menu to choose other games to watch without having to exit the one you are currently watching. Providing your internet connection is fast enough the quality will be comprable to a HDTV broadcast, right up to 720p at 60fps.

If you’re a superfan and need to follow more than one game at once, then watching it via a computer is for you, as you have the ability to watch up to 4 games at the same time, simply click on a screen to change audio, or make one game full screen. You also have live stats on the side of screen so you can crunch those numbers whilst enjoying the games.

The tablet app is quick and simple to use, perfect for watching on the go. Similar to the Xbox app, a menu pops up along the bottom of the screen so you can easily switch games. Tablet footage (On Andriod at least)  is not HD, but still very impressive when viewing on a smaller tablet screen.

With the play-offs looming now is the time to get yourself an NBA Game Time subscription – Visit http://watch.nba.com/nba/home to start viewing instantly.

Ripped off at Sim Lim Square