Ask people to name the world’s best dance music festivals and you are sure to get answers including  names like Ultra Music, Creamfields, Global Gathering and Tomorrowland. But Germany’s lesser known SonneMondSterne  (SMS) should really be added to the list. Why you ask? Read on and find out. 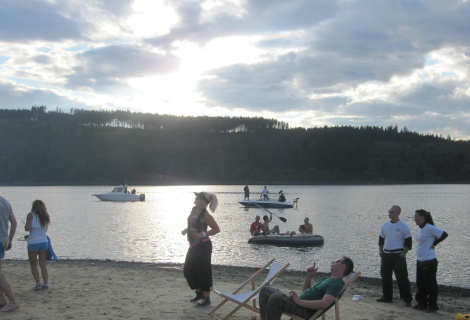 This is a festival I would go to regardless of the line up. How many festivals can you say that about? This festival feels more like a community, a mini-tent city that is around for 4 nights every year, where everyone is close, friendly and  then disperses until next summer when they do it all again. The affinity people feel towards this festival is beyond any I have experienced before. An example is this guy I met (pictured). He has not taken his SonneMondSterne wristbands off since he attended his first SMS over 2 years ago, and I am pretty confident he is still wearing them today. 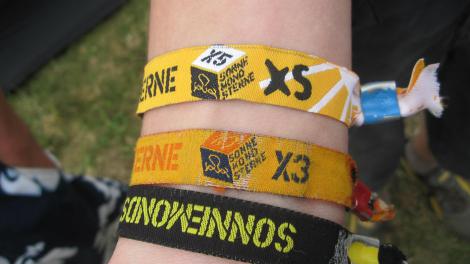 You can tell people love this festival by the fact this guy hasn’t removed his SMS wristbands from the last 3 festivals. 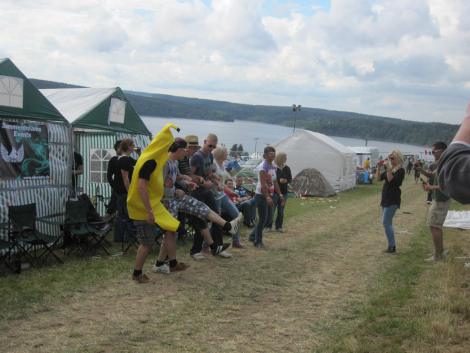 The community feel at SMS is unmatched.

The other reason is the location. Up on a hill across a blue lake (sounds familiar) is where you will find SonneMondSterne. It’s a natural ampitheather  with the festival taking place at the shores on the lake with the campgrounds stretching up the hill surrounding it. The view from the top of the camping ground down is really special and you know you’re part of something big. 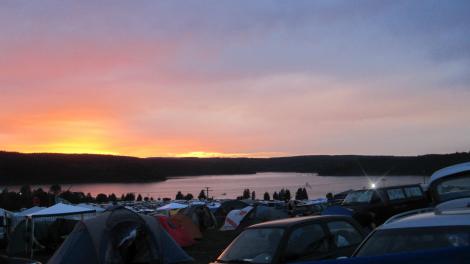 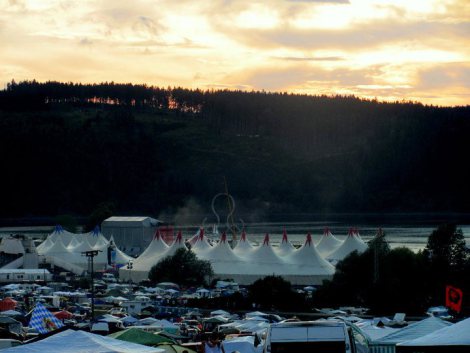 SonneMondSterne view of the festival from the campground. Credit Ina from Travelettes

The lake plays a pivotal role in SonneMondSterne. Not only does it provide a pretty stunning backdrop. The front of the lake is converted to a tropical beach, with soft white sand trucked in and placed along the shore. Perfect if you want to bring a towel down, chill in the sun and take a swim. Or for grabbing a beer whilst taking a break between between acts. There’s also two arenas on the sand to get your beachside groove on, and it’s not uncommon for a few boats to be anchored just off shore filled with revellers enjoying the tunes. Showers are in limited supply at SonneMondSterne so further down the shore from the festival is the unofficial bathing area. Bring your soap and shampoo and mates for a real “back to nature”  social washing experience. 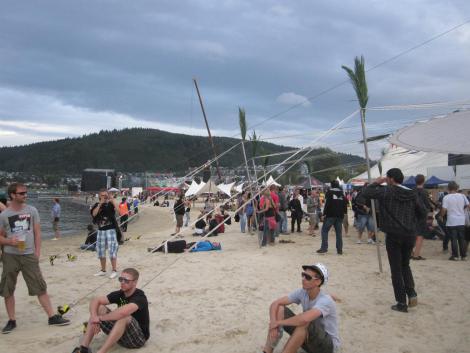 I arrived at SonneMondSterne not really being fully prepared in what it was about. After all it was my third music festival in as many weeks and I was really just going along with the flow. It was surprising that the parking wardens asked if we wanted to set up camp in the loud or quite areas. We choose loud without really knowing what we were getting ourselves into. Why the distinction? Aren’t all festival campgrounds going to be somewhat loud anyway? Well here my dear friends is where SonneMondSterne differs from other festivals. During the first and last nights of the festival has either yet to begin, or has been over for a few hours. So these pre and post nights is when the party happens in the campground. People literally bring their own turntables, mixers, amps, lights and lasers. Plug them into some hefty generators and create their own perfectly engineered temporary clubs in a tent (How German can you get?). Some take this very seriously creating separate rooms within their tents with bars and chill out zones with couches. Despite this all happening people’s private campsites everyone is welcome to stroll around and join the party. There’s lots of variety everything from happy hardcore, techno, house and dub-step. Don’t like what you’re hearing? Simply move about 10m to the next tent. It’s a smorgasbord of  over 100 tents of up and coming DJ talent, no cover charges, BYO drinks and thousands of friendly people from all over Germany and the world. 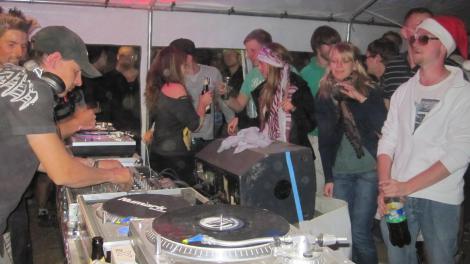 Home made club in a tent. This is what sets SMS apart from other festivals.

When the festival does start on the Friday afternoon it does not stop for 3 days. If you can party that hard you can always find a tent or arena open 24/7. Despite this the crowd are not the messy sleep deprived zombies that you would expect. Most people do retreat for their tents now and then to recharge and cook some food. 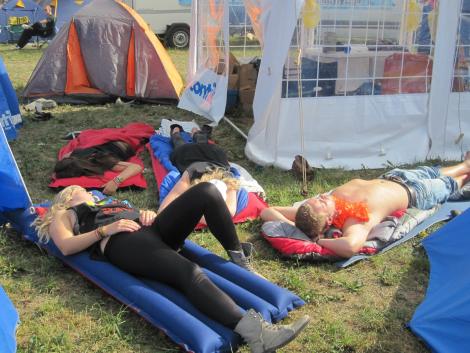 Sleep by day, party at night.

This year there are a total of 9 areans to choose from including the SMS Boat. A floating party if you want to get out on the lake. The main arena is outdoor and is situated below illuminated steel version of the SMS logo hanging from a crane. 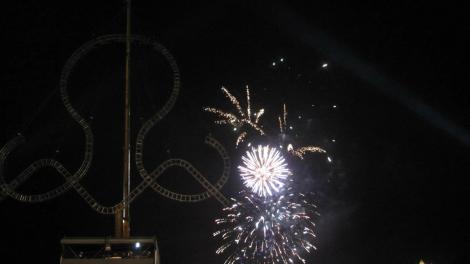 Fireworks above the main stage welcome the evening’s main acts.

In 2011 this arena was home to Swedish House Mafia, Chemical Brothers, Moby and Mr Oizo did his thing live. This year (2013) welcomes Chase and Status, Nero, Knife Party and MIA amongst others. The second main arena is a Sven Vath’s Cocoon tent focusing on techno (as it should in East Germany). When I visited Carl Cox was in control of this tent for a ridiculously long amount of time, allowing him to explore all corners of his musical personality. Other Techno heavyweights Cris Liebing, Erol Alkan and Miss Kitty where there to back him up. 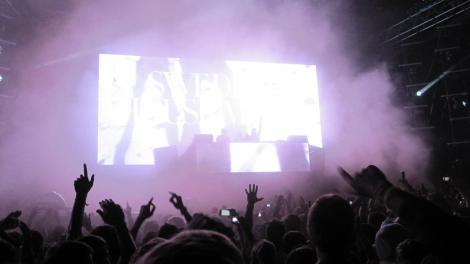 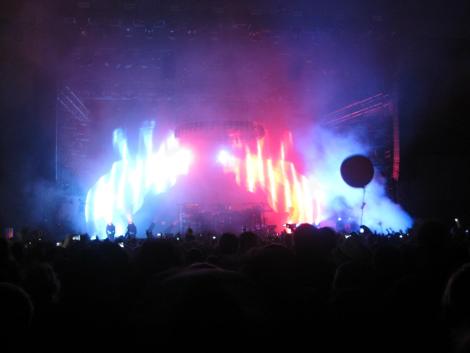 Chemical Brothers rocked the main-stage with their visuals as well as their sounds.

The flowdown of other arenas is varied and something to satisfy all tastes. From retro tunes on the beach, to some upmarket house in a swank looking tent. Some of the clubs in Leipzig and Berlin curate their own arena’s with their local DJ’s. Some great talent that you’ve probably never heard of or will hear of again, take a listen whilst you have the chance. 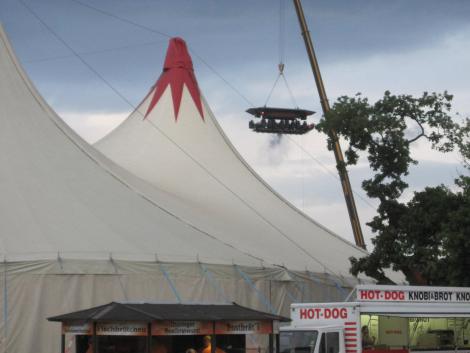 A bar suspended by crane above the Cocoon tent.

If you’re heading to Europe, you could easily go to Creamfields, Sonar or Dance Valley and I’m sure you would have a great time. I’m also sure you will likely pay double the cost of the ticket as one to SonneMondSterne. For your extra money you’ll also be subject to expensive food and drinks and overzealous obnooxious crowds. OR… you could look a bit deeper and check out SonneMondeSterne –  a festival that still brings in the big names, has a fantastic community feel. You can park your car at your campsite (no carrying gear!) and even has it’s own beach and stage on a boat!  All at price that will keep enough Euro’s in your pocket for a decent night out in nearby Berlin, Liepzig, or Prague. For me it’s a no brainer. 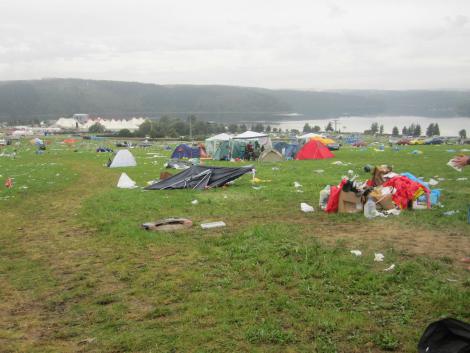 The Aftermath of an epic SonneMondSterne

Thank You movie from the event I attended.

Preview movie for this year’s event.

Tickets and information is avaliable from their website : sonnemondsterne.de  (English version available here)