Namsan Mountain Park, Shopping in Meyong-Dong and Dongdaemoon, Gyeongbok Palace,  or a walk along the Cheonggyecheon Stream. All of these  should be near the top of your list of things to do if planning a visit to Seoul. However there’s one attraction that I believe should be placed above all of these on your Seoul Must-Do’s and it’s unlikely to be found in a typical guide book or recommended at a tourist information centre. It is an exciting day or night out gives an authentic and unique insight into popular Korean culture. Strangely enough, it’s a Korean Baseball game. 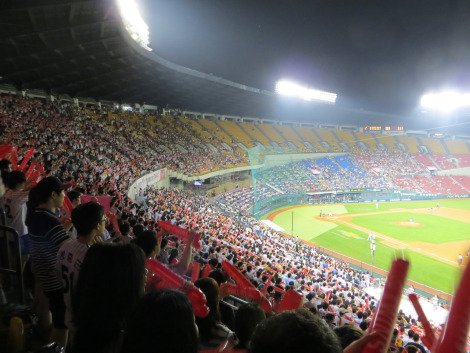 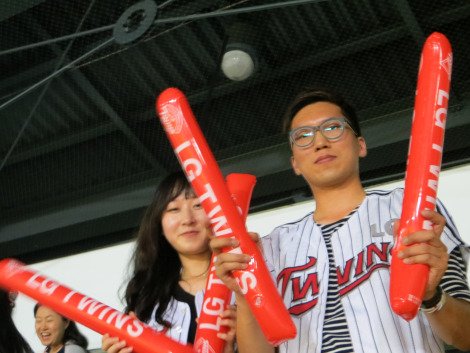 Typical Korean baseball fans with Thundersticks.. I think they’re confused as to why I’m taking a picture of them.

Now before you write me off and say that you’ve seen plenty of American baseball games on TV and it’s slow, boring and not a way to spend your valuable time on a holiday. I have to explain to you that the atmosphere and environment at a Korean game a totally different.  Let’s break down a typical day at a Korean ballpark.

There’s no Cheerleaders at baseball I hear you say, well this is not America, this is Korea where there’s not only cheerleaders, they are a big part of the experience. With Baseball in Korea, you’ll find Cheerleaders dancing on a stage at the base of the  stands, the Cheerleaders are most active between innings, but also they take the stage full time in the final innings to really give their team a boost. Expect to see costume changes throughout the game anything form sparkly dresses to skimpy versions of the home team jerseys. 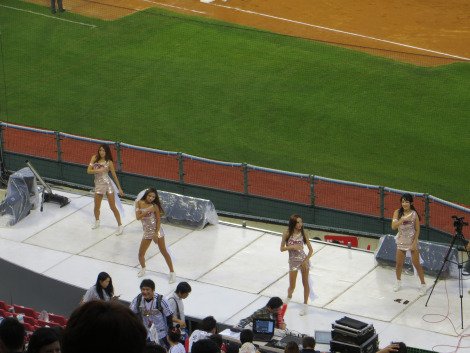 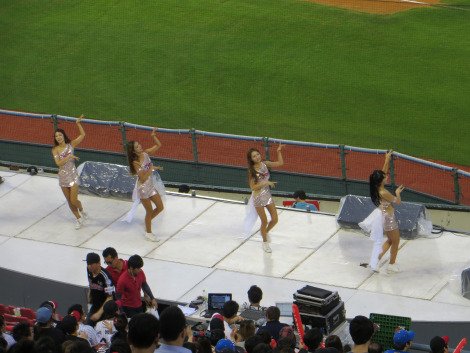 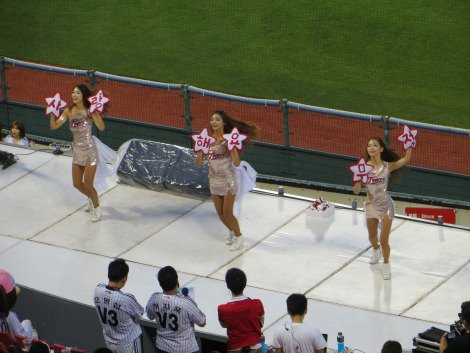 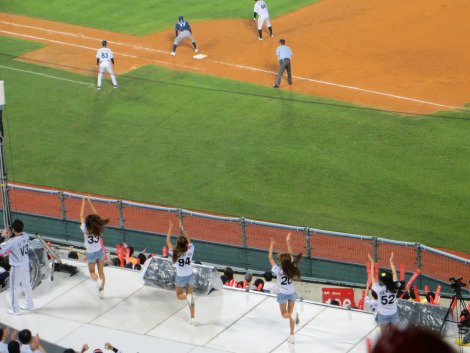 There really shouldn’t be any seats in the stadium because the crowd will be standing up and singing the entire match. It appears that every player has their own song too, and all this singing and chanting is lead by a crazy man (most likely a distant cousin of Psy) on a stage built into the stands. When you purchase your ticket you’ll be asked if you want to sit with the home or away teams fans, this is because the away team also has it’s on stage set up with their own crazy man, female dancers and sometimes even drummers and other musical instruments.  If you want to experience this atmosphere at its best, you MUST choose to sit with the home fans and be in the thick of it all. 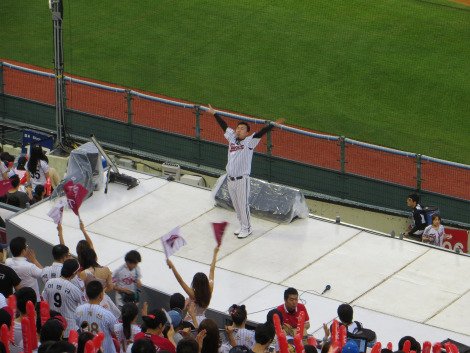 Our fearless leader, directing the chants and songs. 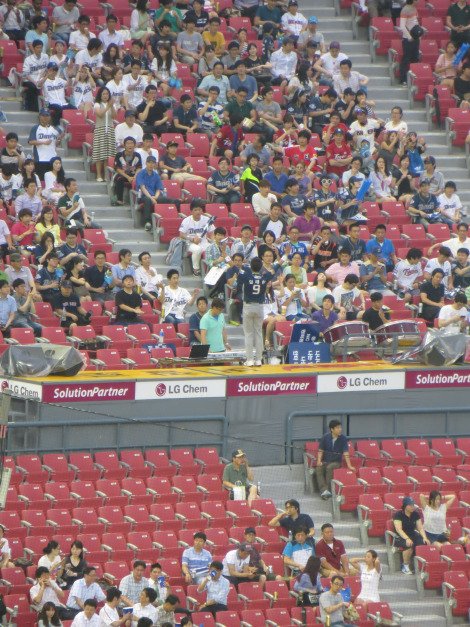 The away teams cheer squad complete with drum kit 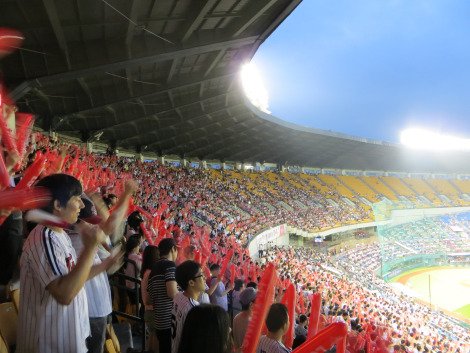 Fans singing and bashing their thundersticks

Baseball games can go for a pretty long amount of time so naturally you’re going to want to have something to eat while there. Thankfully your choices are cheap and plentiful. Out the front of the stadium I went to in the Jamsil district of Seoul, was a bunch tables set up with Korean “mom & pops” selling very fresh Korean  food. Even though these stalls are outside the stadium you’re welcome to bring food bought from them, including the cheap beers they are selling, into the stadium. (This also means you can bring your own food from home as well). I won’t lie, much of their food to me looked not so appetising, like one that appeared to be a bunch of tentacles sticking out of a cup. But if you’re brave, then go for it.

Next you have the more commercial options. Inside the stadium are convenience stores such as 7-Eleven.  You would think being inside a sporting venue the price would be jacked up and selection reduced. But this is not the case. Grab all the beers you like for about $2  – $4 each, or some chips  to munch on through the innings. There are many in the ground so you’re never too far away from one if you need to re-stock during the match.

If you want to make a real occasion on it, then at Jamsil stadium is a  tent to the side of the stadium with a smoking BBQ in full swing. If you really want to indulge I recommend coming about an hour before the first pitch, grab one of the  table and chairs under the tent and take full advantage of this tasty option.

Finally there are your takeaway restaurants also littered throughout the stadium, serving anything from traditional Korean meals to your American imports like KFC , Burger King and Dominos Pizza. Interestingly in true Korean style the meal deals at KFC, Burger King are sold as sets for two or four people as Koreans are almost always doing things together.

Baseball in Korea – The Game

Baseball in Korea has rules are pretty much exactly the same as what you will find in the USA. The only major difference is that everything is metric, so there will be 160kph pitches and 100m line drives. 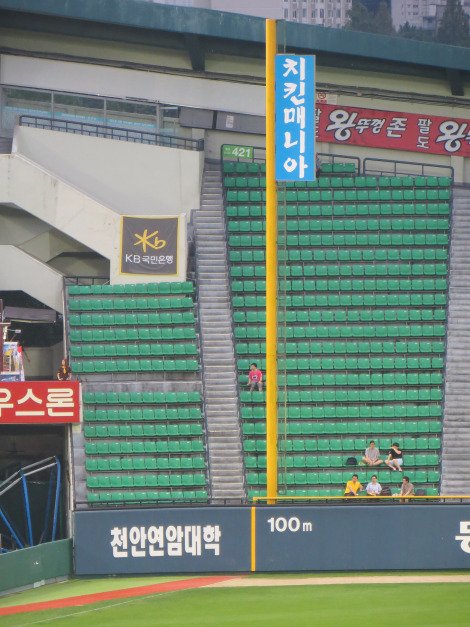 100m back fence at the Foul Line

The time between innings is not wasted, as it’s an opportunity to provide even more entertainment.  And I can tell you this is a little more exciting then your typical 7th innings stretch. Events between innings can be anything from the cheerleader girls doing a dance (pretty standard), to a beer sculling competition for girls only (this would never happen in Australia, even if it was guys), random people being shown on a big screen being forced to kiss! (very fun especially when it lands on traditional shy older people) and what I can only guess is a “dance as hard as you can” competition. I’ve got some videos of all these below. To be honest this was more entertaining then the game.

Kiss Time, if the camera falls on you, you must kiss the person next to you. 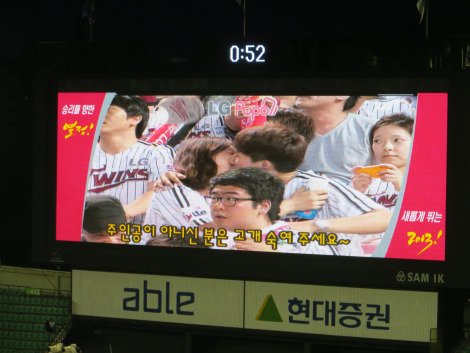 Kiss 1. Young Couple, no dramas although the guy front of screen seems a bit shocked 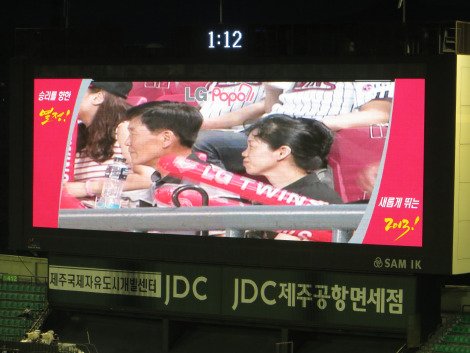 Kiss 2. The camera falls on the older couple. This is peer pressure on a whole new level 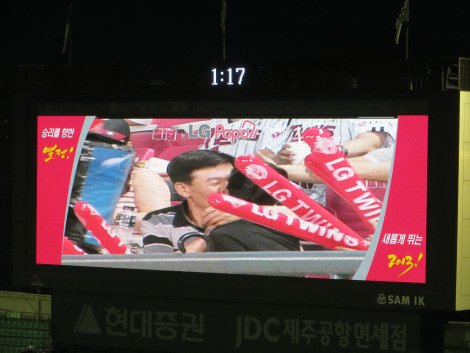 Kiss 2. They give in to the crowd’s cheers and kiss

One other observation I noticed during the breaks in-play was how well the umpires were looked after. The mascots usually ran out on the field to them with drinks and towels so they could freshen up. I don’t think I’ve ever seen refs treated so well in any other sport. Perhaps it’s the home team trying to treat them extra well in the hope of some favourable calls.

At the end of the game I saw, the home team won with an additional innings required to separate the teams  in an exciting match. Once victory was confirmed, the party began…. And was over again in about 10 minutes, with a reminder on the screen to make sure to come back tomorrow, especially because it was going to be “Businessmens’ Day” 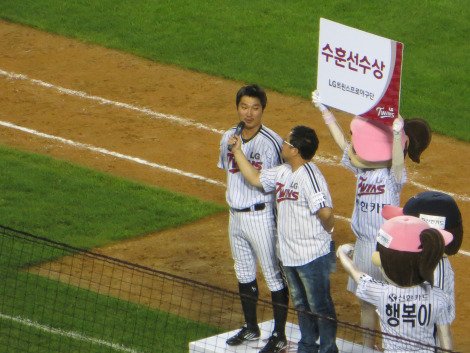 Man of the match is presented to the crowd 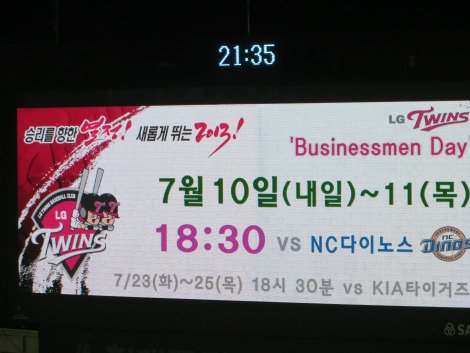 Make sure you come back tomorrow for Businessmen Day

I’m not sure my words do justice of what a great experience this is, but I hope my videos do.  From my 16 days in Seoul this is the experience that stands out the most and least likely to forget. Go and see Baseball in Korea.

Guide to Watching Baseball in Seoul

Two out of the three Seoul teams (LG Twins and Doosan Bears) play out of the very easy get to Jamsil Baseball Stadium.  (Metro Station: Sports Complex on Line 2), or a 5 minute walk from COEX.

The Baseball Season runs from April to October each year with games played most nights of the week.

Entry for general seats is KRW9,000 and I recommend sitting with the home team fans to be part of the atmosphere and have a great view of the entertainment. Tickets may be more expensive on the weekends. There is no need to book ahead you can purchase from the stadium box office before the match.

To find out when a game is on, Korea 4 Expats has fixture information in English updated each month.