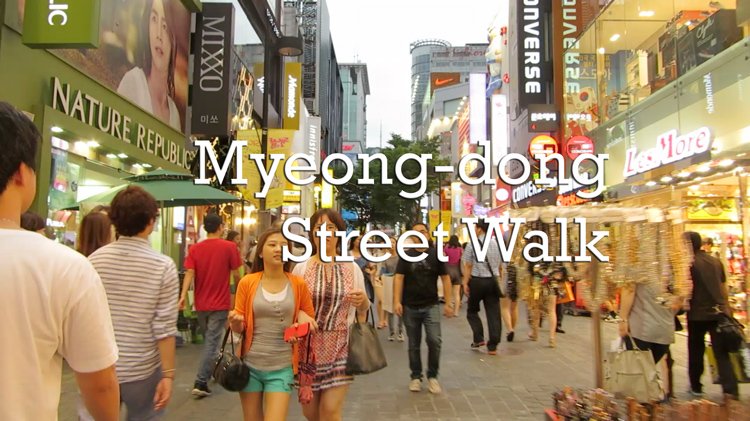 The Myeong-dong district of Seoul  is only 1km squared yet has an immense amount of awesome crammed into that tiny space. The bright, colourful and narrow streets are home to everything from quirky boutiques, designer clothing outlets,  colossal department stores and more than a dash of randomness. Take an unedited Myeong-dong street walk in full HD up one of the main streets and see what it’s like in one of the world’s most unique neighbourhoods. Keep an eye out for the guy wearing an apple with attached angel wings over his head.

Watch in full screen at 1080p to get full sights and sounds experience of a stroll through Myeong-dong.

Myeong-dong is one of the busiest places in Seoul and is among Korea’s premier shopping destinations. Over 1 million shoppers pass through this area each and every day. Located in the heart of Seoul, Myeong-dong market has been a witness to Korea’s tumultuous modern-day history as a center of city politics, economy, and culture. To international visitors, Myeong-dong is a stunning shopping district with countless shops and restaurants. Its wild popularity has led to similar shopping districts springing up all across the country.