The best beach in Europe is in.. Denmark??

The best beach in Europe is in Denmark? I kid you not. I had trouble believing it when I first heard it from my Danish friend Jakob. He convincing me to come visit his hometown of Aarhus ,Denmark and offered up the beaches as a reason to go. In my mind Denmark is a year round cold country. If there was a beach I imagined it would be wind swept, with sand flying in your face, and the icy cold North or Baltic Sea crashing onto the shore. Not exactly a place I would want to take my clothes off and get a tan.

Aarhus is the second largest city in Denmark and the traditional summer home of the Danish Royal Family. Upon my arrival in this area it wasn’t hard to see why the Royals pack up and move here for summer. This beautiful seaside town has everything you need for a summer holiday. Waterfront, friendly nightlife, great shopping and culture to go along with it.

Waiting at the airport for my friend Jakob to pick me up, one of the first things that I noticed was that beer was openly available to buy in the vending machines, and no they don’t check for ID.

First stop Jakob took me to was Elbertoft. This is a smaller seaside town that is dear to the heart of many Danes as it has retained its traditional cobbled streets and buildings. It’s also town were almost all Danes spent part of their summer’s growing up before the age of discount airlines and cheap package holidays to Greece or Spain.

Jakob took me to meet his parents who had a delightful oceanside house a couple of kilometres out of Elbertoft, it was here that I first started to believe that the best beach in Europe really could be in Denmark. It was very interesting to chat with his parents and discuss the difference between Australian and Danish culture. Surprisingly not a whole lot, however Jakob’s Mum still rides her bike to work rain, hail or shine, and she’s in her 60’s. Another difference which I was set to experience a head on collision with is cuisine. Most notably pickled herrings. I don’t even like fish, let alone pickled raw fresh. I was dreading this moment, but not wanting to be rude to my hosts I wasn’t going to back down.  It wasn’t as horrible as I was dreading, but I was thankful for the ultra strong mustard to hide some of the fishy taste.

From Elbertoft, we headed in to Aarhus for a night on the town. We caught up over a few EXPENSIVE beers in Aarhus town by the beautiful canal and later at the Bodega before calling it a night.

When we woke, both Jakob and I were excited for BEACH DAY! And what a day we had! Not a cloud in the sky and 32 deg c (Denmark a cold country? Not in August!). In true Danish fashion we rode bikes to the “strand”. It was an easy downhill ride past the summer residence of the King, and the harbour before arriving at the sandy shores of Den Permanente Beach.   The beach is an historical outdoor- sea bath, with private cabins and sheltered beaches for nude swimming. Oh there is also it’s own “viking club”.

We found a spot on the very warm sand, and sprinted into the refreshing water. This could not have been further from the cold, dark and windy beach-scape I imagined.

First difference I noticed was the grey walls dividing the beach into three sections, one for nude bathing females, the middle for wearing swimsuits and the right side for naked guys.  The walls were placed on top wharfs which provided another fun opportunity of walking out to the end and jumping off.

Beyond the end of the wharfs three or four sailing boats where hanging out having their own parties. Nice but also a little worrying as they all seemed to be anchored to get the best view of the female nude area.

Swimming and jumping off wharfs does build up an appetite and here’s were being at a Danish beach has its advantages – Danish hot dogs! (AKA Pølsevogn) I’m not sure what makes them so good. It could be the roasted onion, pickled cucumbers or the tangy sauce or the redicuously high standard of Danish food,  but after riding on bikes then swimming all day it’s just what two hungry guys needed.

After munching on the hot dogs whilst observing “Side 9 Pigen” girls do a photo-shoot (The equivalent of Page 3 girls in the UK). We did have another beach to head to. An artificial one built by the harbour for a recent beach volleyball tournament and had been allowed by the council to remain for the summer. Jakob was pretty excited about visiting this place, as he kept singing “Beach Bar, Beach Bar” constantly on our journey there.

Things were more chilled out here, it was definitely a more classy place with a DJ spinning chilled beats and patrons some patrons were even wearing clothes. The bar was made out of a mixture of shipping containers hidden under a shell of wooded panels and frames. Sand had been trucked in and we were perched right up on the waters edge at what used to be shipping docks. 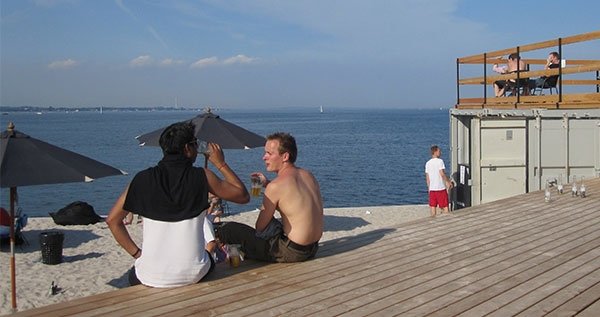 The Danish affinity with taking off their clothes continued. A man came down and set up his own little barber shop on top of one of the cascading seating areas. Strange right? We’ll it got stranger when he decided to cut hair in his underwear. No one battered an eyelid. In fact people started dancing a waltz next to him. But perhaps that sums at Denmark, a lot of style with the odd bit of randomness thrown in to keep things interesting.

When planning your next European beach escape, I challenge you to look past Spain, Greece, Portugal etc, and consider Denmark. I think you will be pleasantly surprised.  Aarhus itself great vibe to it, a city where hanging out a the beach is part of every day life as it is in Bondi or Copacabana. Add in amazing nightlife, a great arts scene and you’re on to a winner. The very friendly Danes will be happy to meet you and intrigued why you came to visit,  so don’t worry about being lonley oh and they aren’t exactly ugly either.

POSTSCRIPT.. By the way, as much as I enjoyed De Permanente Beach. Jakob told me later that it was not the one voted one of the best in Europe. Turns out it was further up the coast and he was too lazy to make the journey that day. Something for the next trip!