It’s funny how what can initially seem like a tragedy can end up one of your most memorable experiences.

Catching the train into Barcelona from the airport, I noticed a strange man reading whilst standing up, he seemed to hold the book very close to his face.  Although a bizarre way to read a book, I really didn’t think too much off it, until about ten minutes later when I noticed the buttoned up side pocket of my cargo shorts was unbuttoned and the wallet that was once in there… no where to be seen.

CLICK HERE TO SKIP TO THE STEP-BY-STEP GUIDE ON WHAT TO DO IF YOU’RE PICK POCKETED. 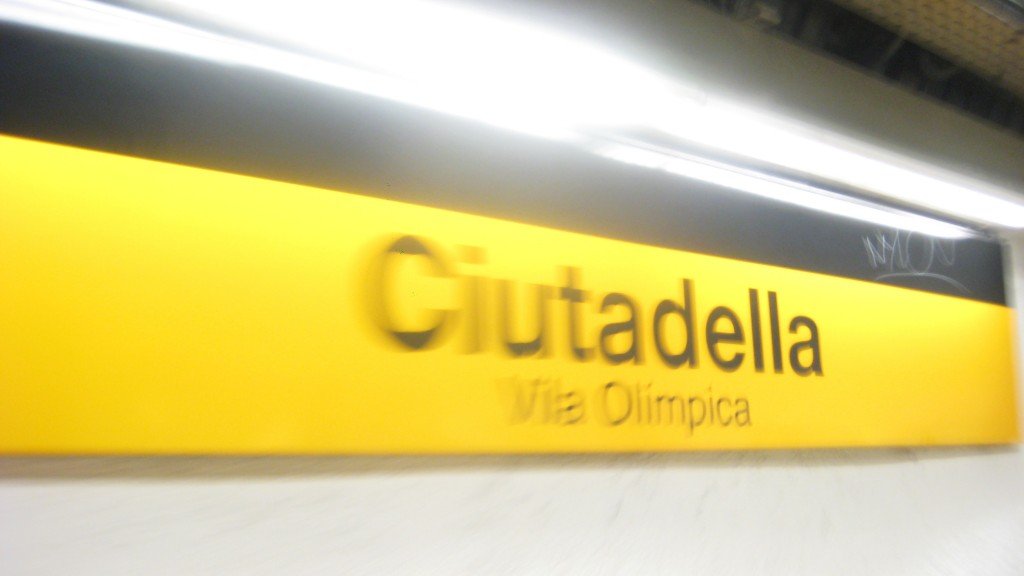 Many of Barcelona’s pick pocket crimes happen on the Metro

I had been pick-pocketed. Something that some experts believe happens an incredible 6000 times A DAY! to visitors of Barcelona during the tourist season, and to make matters worse I had just withdrawn €400 from the airport ATM.

My plans of checking in to the hotel, and then checking into the Barceloneta beach were now to be replaced with long waits on hold to banks and credit card companies. To their credit, I will say the credit card companies are amazing at dealing with this. Who is not so great at dealing with this was my Australian bank. My Visa Debit (which is linked to my savings account), would only be replaced by the bank by sending to my home address in Australia. There was no chance of a temporary card or having it sent directly to my hotel. The bank said it would take 5 – 7 business days to make the new card and send it my house. A courier from Sydney to Barcelona would probably take another 3 or 4. I was looking probably a 10-14-day stay without money and accommodation only booked for 5 nights.

At this point I want to give a shout-out of gratitude to my friend Alex who was travelling with me at the time. I was able to borrow some initial funds from her, and still able to do all the standard Barcelona traveller things with her. But she was only there for 4 nights; once she left I was on my own.

I’m pretty sure I am the only person to have checked out of a 5 star hotel, and caught the metro to the grubby part of town check into a grimy hostel. I literally felt like a dog with my tail between my legs. Given it was the middle of August, there wasn’t exactly much choice of accommodation available, so I found myself in a 12 bed dorm not much wider than a hallway and half the sand from the nearby beach on the floor. 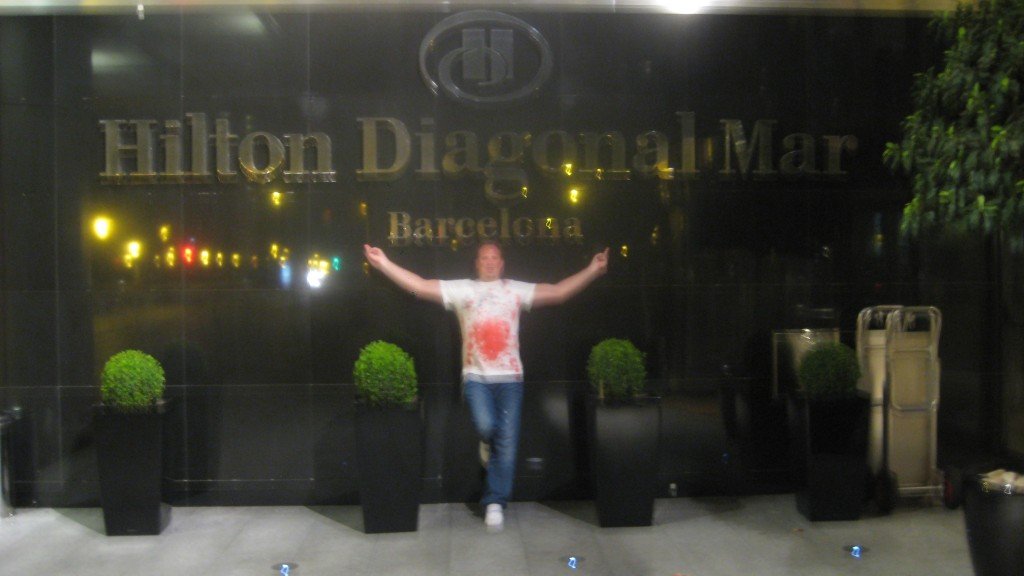 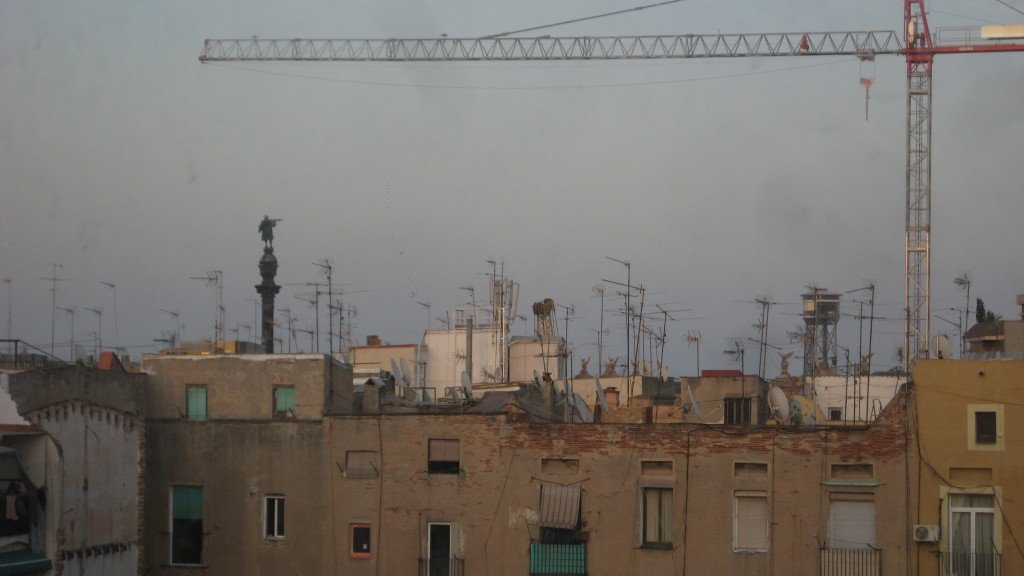 Where I ended up, view out of cruddy hostel window.

Given the popularity of Barcelona in summer, this would only be my home for just one night, I was headed to another hostel for another two nights, before coming back to this one. Hostels all over BCN were booked out and as such I would be hostel surfing. This wasn’t such a bad thing, except for having to pack up and be out by 10am most mornings. Very early when you’re on Med time and up to 5 or 6 the night before.

It suddenly felt like the holiday was over, and I quickly established a routine (although a very relaxing one) Up at 10:30 – 11am and I’d head the corner store. Get 1 large baguette to last me the entire day, and a bottle of Coke, chosen mostly for its high energy content.  If I wanted to treat myself I might grab some prosciutto or salami for the bread. The diet of a peasant, but I actually didn’t mind, it was simple and tasty and costing me less than €3 to eat daily. Weight loss was a welcome side affect.

Next on the agenda, reading, and finding a nice place to read. This was usually the beach, but varied to park, maybe even shopping mall food court. I could write about my reading experience, but really I don’t think reading about someone reading is going to be all that exciting to read. 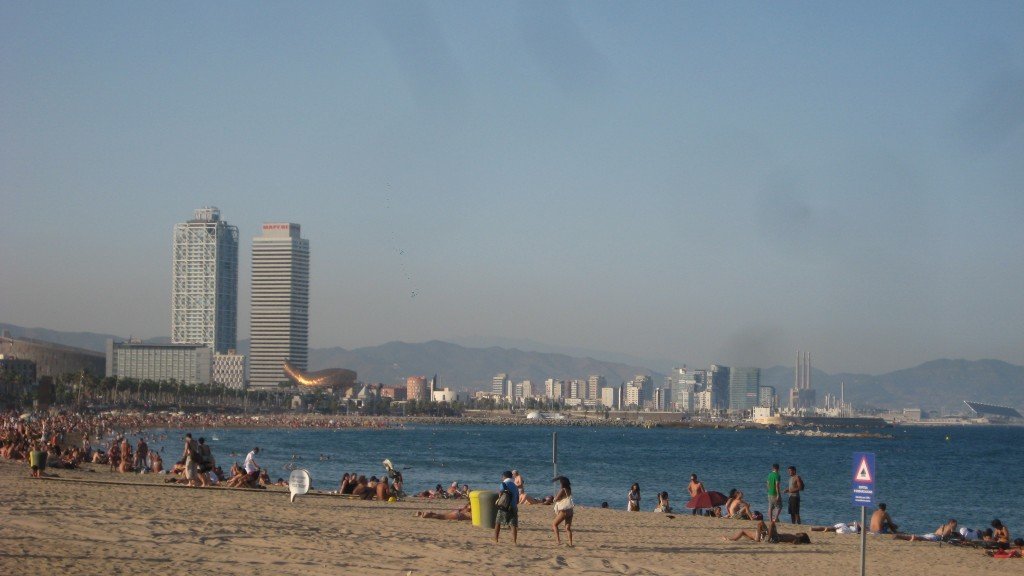 The view from one of numerous reading spots.

Barcelona was one of the first cities to have a public bike system, and me being totally unfamiliar on how such a system worked (ie you need a membership card to unlock bikes and deduct a small cost from your account) I was not unsurprised when the first bike I picked up from the rack was loose and ready to be ridden. With all the time in the world, I figured I’d take a massive bike ride, starting down to the Columbus Monument across to Port Vell, then along the beach front, past the Villa Olimpica along the jetties before finally settling near my old home 5 star home at Diagonal Mar. Some 5 or 6km . No surprise to find out I lay on the sand and read my book for a few hours to recover. 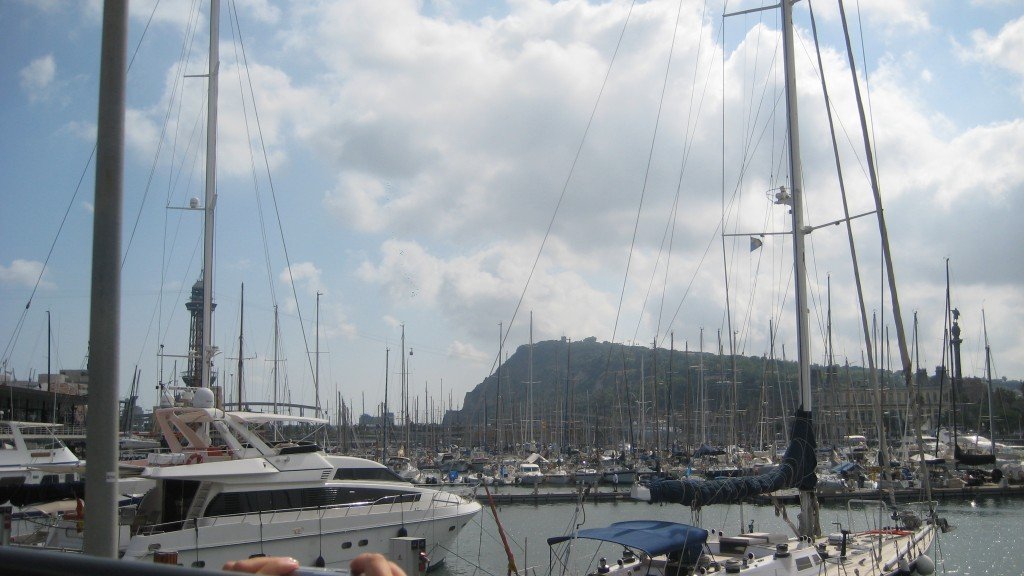 Time to head back. I go to pull my Bike out from the rack..…it won’t budge, I choose another one, also won’t budge. My thoughts here is that there must be some way to reserve the bike when you put it in a rack, so you can ride home, and everyone must be really selfish because they were all reserved. So I keep hunting for another rack, again the same issue. Now I’m determined to break one free, pushing up and twisting the handlebars to try and wrestle the bike free. But it’s all to no avail… only took about 3.5 hours to walk back to the hostel.

Rescued by a prostitute.

The long walk back was best described as a bitch, and I thought I would extend my  €3 daily budget by 1 extra Euro to grab a beer. I knew of a small convenience store in a plaza near by, that I had walked through the day before. I headed off, but when I entered this plaza at night-time, it was a totally different place.

Firstly there was about two dozen scantily clad women spread out all around the plaza, only on closer inspection they were very muscly, had huge noses and their Adams apple’s really well defined.  I had walked into some kind of transvestite prostitute market place. Although an interesting site, this did not bother me too much. I was focused on getting that beer!

I had barely taken two steps into the plaza when a small Moroccan man came up to me and started talking in a hurry. Telling me “Welcome to Spain” and asking me where I was visiting from. I picked up my pace but he stuck with me, leaning in really close, I assume to get proximity to my pockets, but having been stung before my hands were deep in my pockets to block any access.

Thankfully the door to the convenience store was now in reach and I jumped in stat. The Moroccan didn’t follow me in, but instead lurked around the front door waiting for me to exit. I grabbed some beers (I figured I now deserved a 4 pack after this trip) paid for them, and went to leave only to find a short blonde girl was blocking the exit. Thoughts of what else could possibly happen ran through my head.

“What are you doing here?” she said in an Eastern European accent. “It’s dangerous, you shouldn’t come here”.

“Here, hold my hand, I’ll walk you out of here”.  She said. I looked outside at the Moroccan pacing front of the door of the shop like a anxious yappy poodle waiting for me to exit. I’m sure holding her hand couldn’t be worse than dealing with that again.

I took her hand, slightly worried about looking weak that I needed a short girl to protect me!) walked out of the shop and held my breath. The Moroccan bounced up to me ready to continue our conversation (and swipe at my few possessions) to my amazement the Eastern European girl let out a huge hiss at the Moroccan and flashed her teeth at him – Pandora style! It worked and the Moroccan backed off. It literality is a jungle in this little plaza. Survival of the fittest, bring out your inner animal to defend yourself.

I thanked the girl, and actually considered asking her out, but upon further talking I discovered that 1. She was a prostitute and 2. She was a he – although looking at her I would never have picked it in a million years. 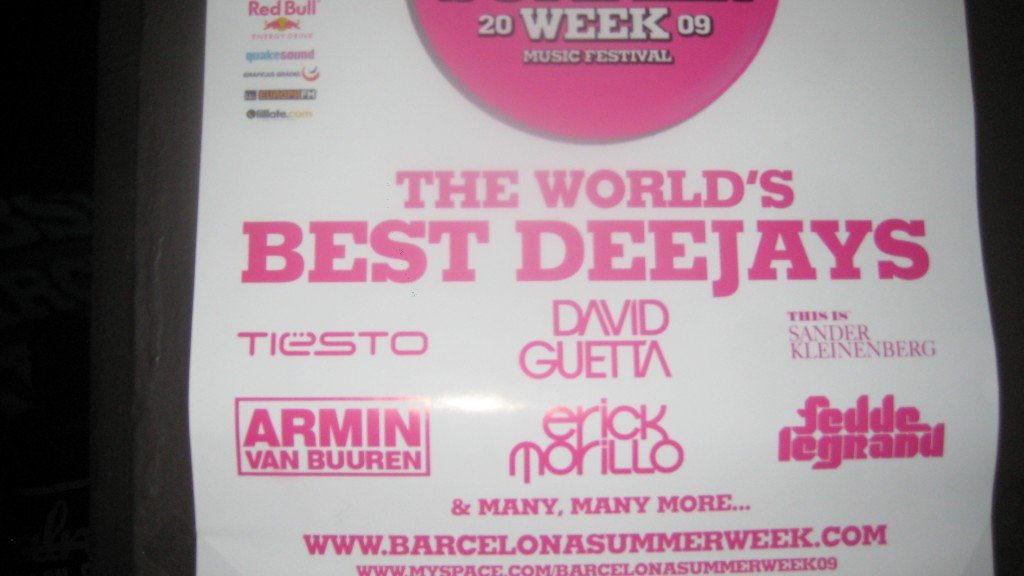 The impressive line up for Barcelona Summer Week

Since my arrival in Barcelona, now over 10 days ago, I had seen posters everywhere for a music festival “Barcelona Summer Week”. Basically the best dance festival line up I’d ever seen at the time. The festival ran for a whole week in the various bars and clubs around Barcelona and culminating in two days at the Olympic precinct on Montjuïc

Being conservative with my money at the time I chose to go to just one day, but the day included, Goldfish, Armin Van Buuren, Erick Morillo, Tiesto and David Guetta. I would be happy to see al those in a year back in Australia. 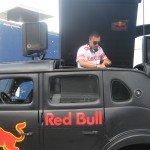 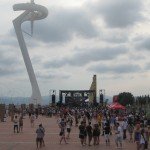 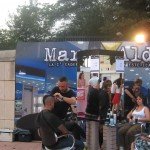 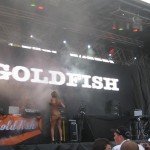 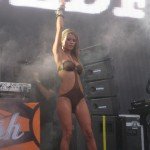 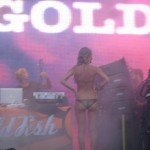 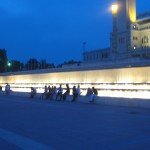 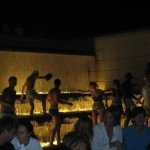 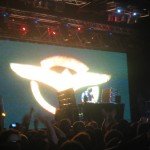 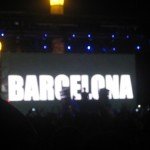 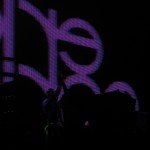 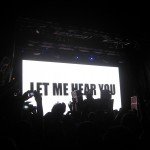 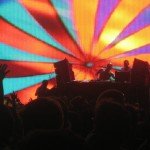 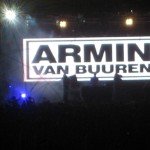 Whilst taking a break on the massive staircase in front of the stadium, I bumped into two Canadian girls living in Barcelona and these girls really knew how to party. A few drinks later we’re all posing for photos with them all over me, and each other, they weren’t afraid to kiss each other and I’m 100% ok with that. 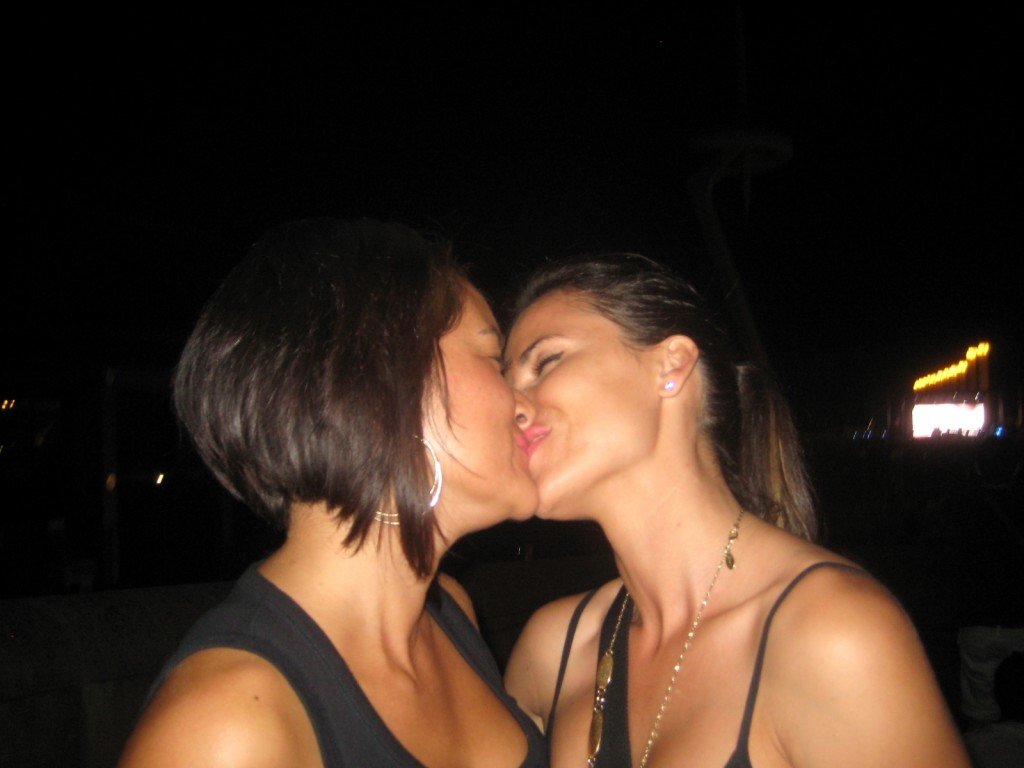 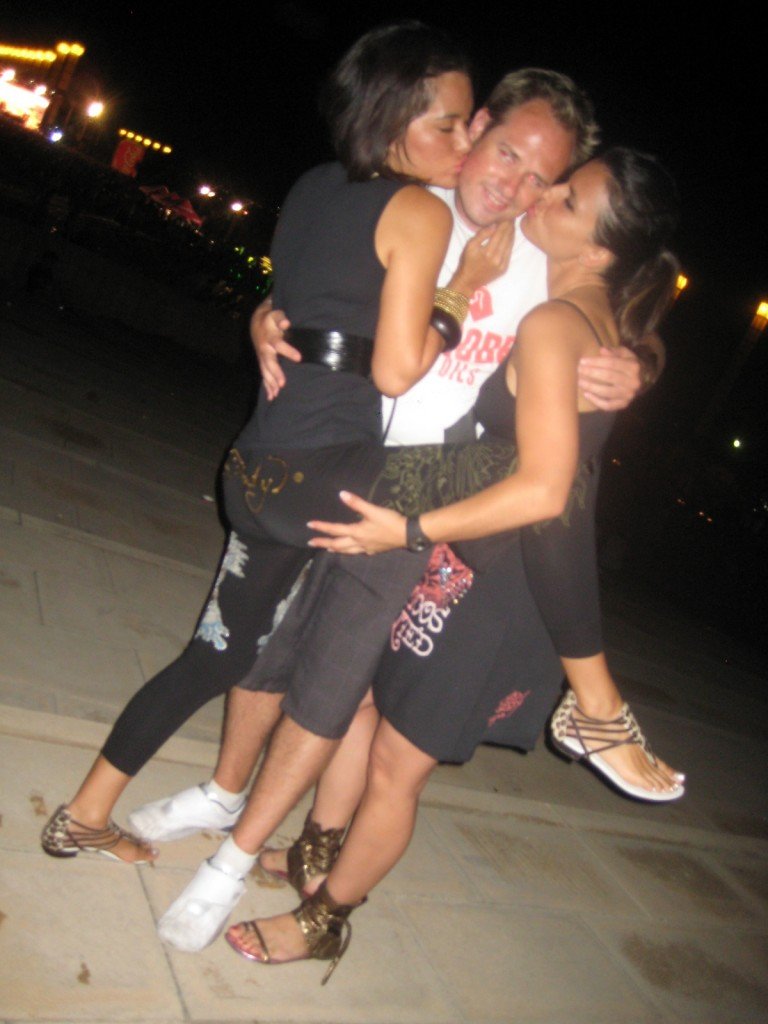 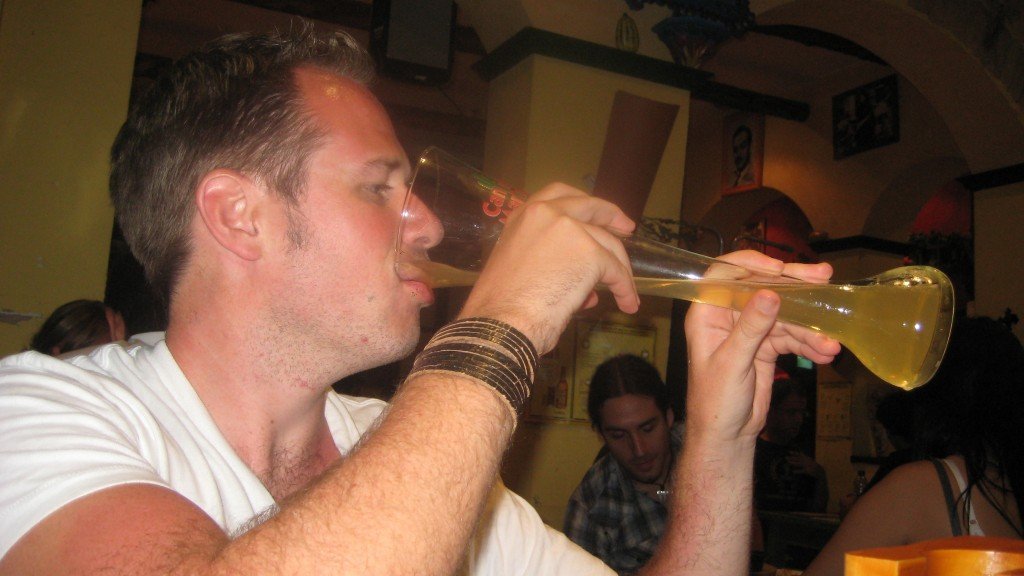 Barcelona like many cities have a thriving backpacker pub-crawl scene and there’s plenty to choose from that are usually cheap yet epic night out.  For me this was the best option for going out. For as low as €10, I can get taken to 4 bars usually with a free drink in each, and finish with free entry into a club. Some even included an “hour of power” which is free beer and sangria for one hour at the meeting point. 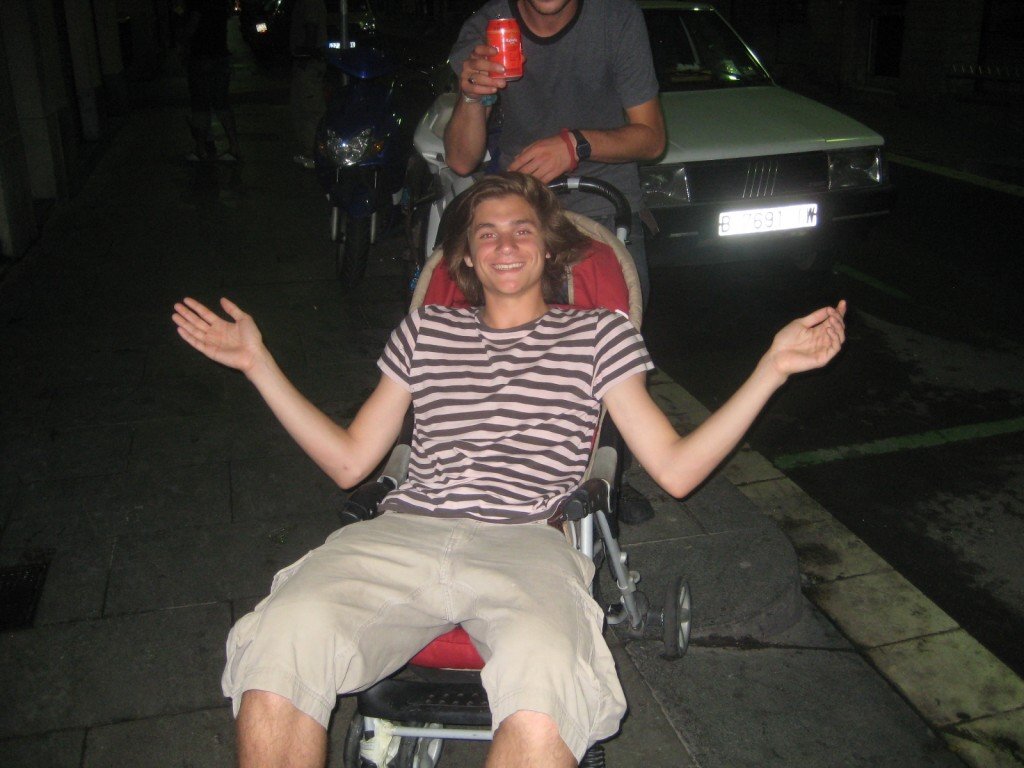 Although it wasn’t the high profile clubbing I expected I would be doing in Barcelona, I still managed to have a ball at everyone and make lots of friends to hang out with in the future days.

Reading and looking at the images above, I’m actually quite thankfully I was pick pocketed in Barcelona.

HAVE YOU BEEN PICK POCKET WHILST TRAVELLING? HOW DID YOU SURVIVE? SHARE YOUR EXPERIENCE IN THE REPLY BOX BELOW

WHAT TO DO IF PICK-POCKETED IN BARCELONA.

The police station for the metro is located within the Plaza Catalunya metro station itself.