A not so wise man (an Amway recruiter) once said to me; “You want to be up the front of the plane and the back of the limo”. With the boarding pass on my last flight showing seat number 1K,  I could not get any further up the front the plane unless I was flying it. We were going First Class baby! An experience that is set to be so great I could not help but share it with you. So put your seat back into it’s upright position and prepare for a British Airways First Class journey from Singapore to Sydney.

My afternoon meeting in Singapore finished an hour early, combined with a very swift taxi ride to the airport meant I was at the airport a staggering four hours before my flight. Normally this would be hell – even in the super awesome Singapore Changi Airport. But I was excited. This meant four hours in the British Airways lounge. Free food, free alcohol and perhaps most importantly, free WiFi. I was actually first to arrive in the lounge which meant some quiet time do get my work done before I could indulge in some champagne. 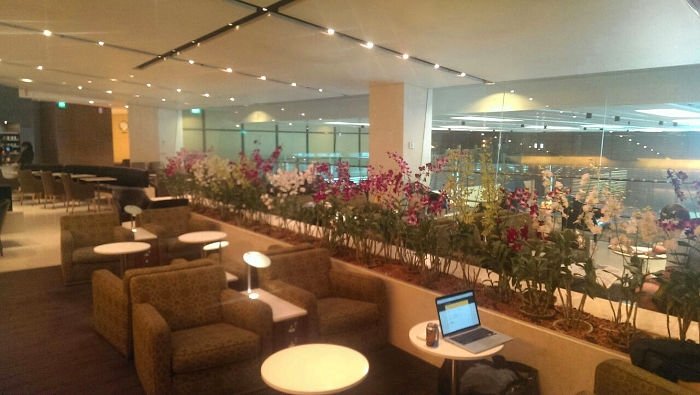 Lounge time felt like it was was over way too quick despite spending almost three and a half hours in there. I was feeling pretty full from multiple trips to the food bar munching on fresh bread, pastries, and salad plus all cheese and crackers you could desire. All while washing it down to the selection of French wines available. Staff also periodically made their way around the lounge offering satay chicken and spring rolls. A little secret  – at the smaller food bar up the back od the lounge you can find  ice cream!

A brisk gate and boarding experience and I was greeted on the plane at the entrance of the first class cabin with the offer to have my bags stowed and be poured a fresh glass of champagne by what appeared to be a small army of British Airways flight crew.  Oddly enough the first thing I noticed was the twin windows illuminated by a cool blue LED light. 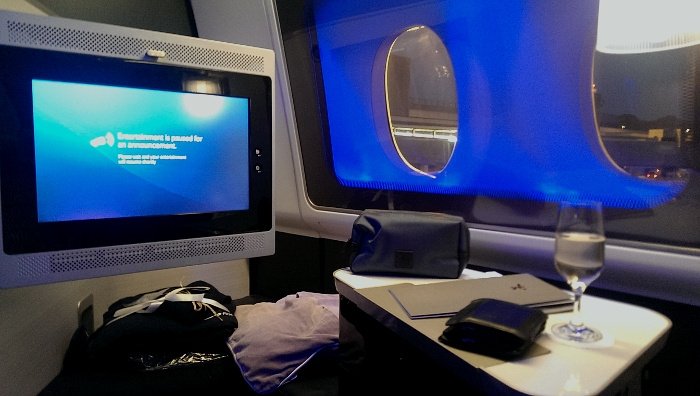 First impressions of first class, the cool blue light on the windows and a very large screen.

Second thing I noticed was the large HD screen. It’s about 4 times the size of what you will find in economy and crystal clear. It’s a touch screen but in reality you will be sitting too far away from it to touch it, so there’s also a handy remote.  The entertainment on British Airways these days is actually very decent including HBO and various BBC channels all on demand. A significant audio collection including the latest editions of popular podcasts (I’ve been waiting for an airline to do this for ages!), and right up my alley,  top tier DJ’s have made monthy mixes just for British Airways. DJ’s include Above & Beyond, Roger Sanchez, Carl Cox and John Digweed.

The seat could also be controlled in all sorts of ways and directions that I would never have considered.  This ensures that it was simply impossible to be in an uncomfortable position. I actually had to ask the steward how to use it – so many buttons and dials! 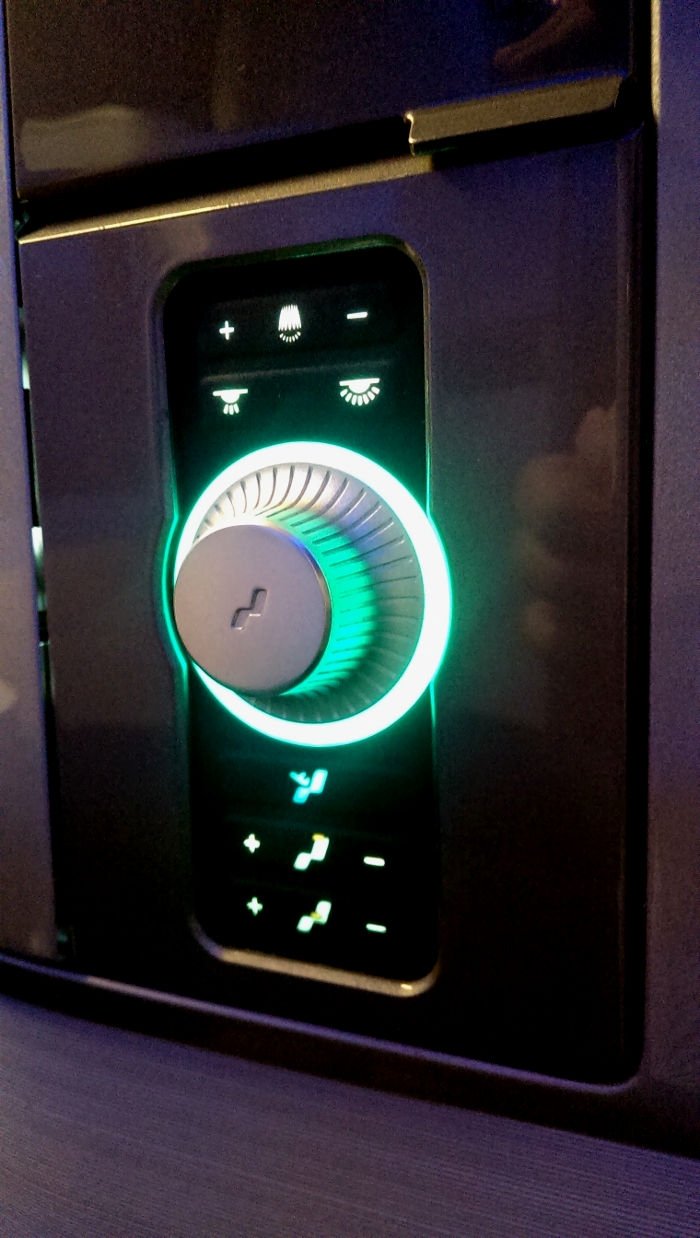 So many imaginable ways to adjust your seat. I actually needed help to work out how to use this.

Also impossible to not notice is the attentive without being intrusive service. I was greeted by name by the ever pleasant stewardess Georgina.  Georgina also checked my champagne glass every time she walked past to check if it needed a top up. The head steward also dropped by to say hi –  firstly to apologise for the late take off (strong winds meant we would arrive in Sydney before the 6am when curfew on planes landing ended), but he also took a genuine interest into why I had been in Singapore and referred to our conversation again when farewelling me  off the plane.

Given it was a night time flight I was given the option of whether I wanted to be woken up for breakfast or not. I was actually going straight from the airport to work in the morning and really could’ve done with the extra hour or so sleep. But I elected to be woken up as I wasn’t going to pass up the experience of another first class meal.

It is said that food is meant to lose 25% of its flavour in the sky. Well this must only apply to Economy class, because this was some of the most succulent and delicious food I’ve ever tasted. 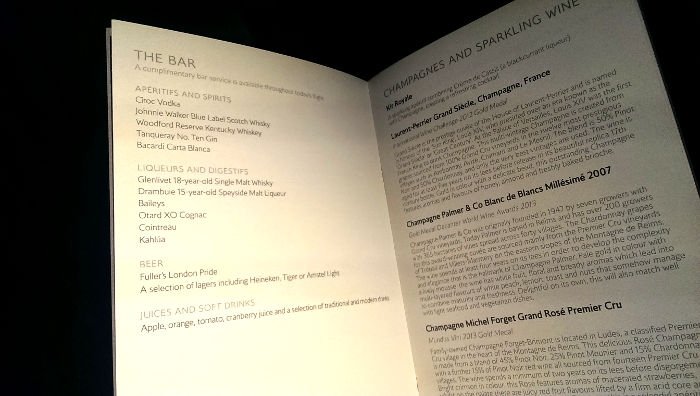 A peak inside the menu. Yes there’s 3 different types of champagne to choose from. 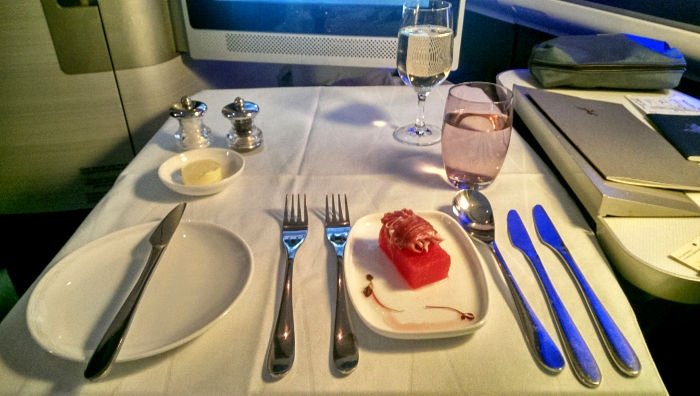 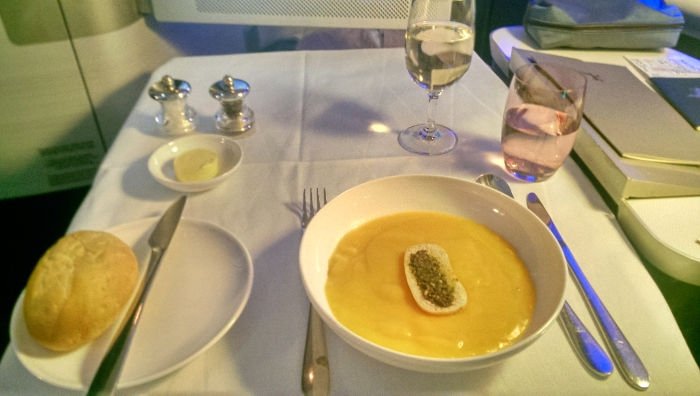 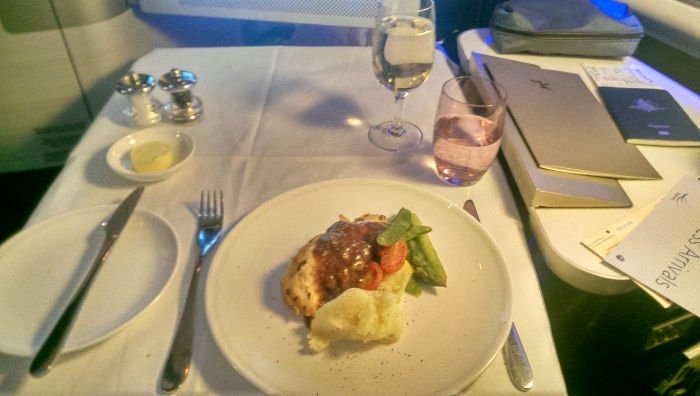 … and the main course. Roasted Chicken. Despite the high altitude pressurised environment it was tasty and juicy until the last bite.

A few episodes of HBO’s True Detective and it was time for sleep. I just had to let Georgina know that I was ready to sleep, and by the time I returned from getting changed into my supplied, soft as feather pyjamas she had converted my epic entertainment centre / dinning room into a comfy and inviting bed, complete with duvet and a couple of pillows.

The super-soft supplied Pyjamas. Yes I kept them to use again.

Listening to Above and Beyond Group Therapy British Airways Edition through high quality headphones I quickly drifted off asleep within a few minutes feeling like I was floating on air (actually I kind of was).

Keeping the customer in mind, Georgina woke me up at the last possible minute to ensure I got every last ‘Z’ out of my sleep. The breakfast menu was very appealing and I couldn’t decide what to get

“Don’t worry, get all of it” said Georgina. So I did; an energising smoothie (divine!) an orange juice, a water, and so many pastries I was about to burst.

Perhaps the final taste of privilege was being given a Sydney Airport Express Pass. This let’s you pass immigration through priority lines avoiding what can be a long and painful queue. But when you’re first off the plane you don’t need to skip the lines because there aren’t any. So I put the Express Pass in my pocket for another time when it will be more needed. 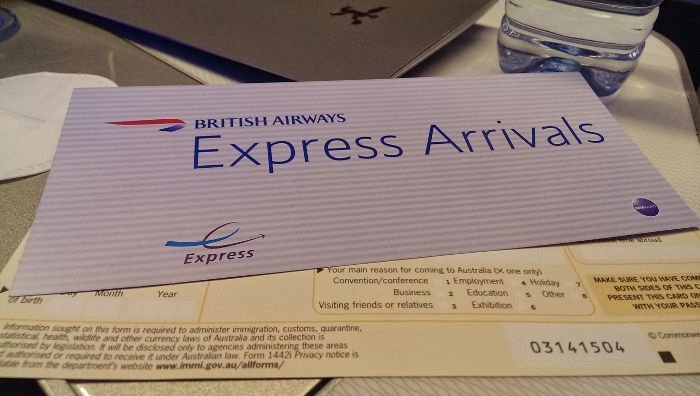 First class passengers get an Express Pass to skip the immigration lines.

I know British Airways first class is not in the super suite class like you will find on Emirates, Singapore Airlines or Etihad. But for my 6 hour flight to Sydney it was everything I could’ve wanted and more. Everyone who gets a first class ticket has high expectations and British Airways met and exceeded them. The Entertainment system (which you can get in all classes) has been made for the modern traveller with boxset binge viewing and up to date podcasts on demand. The personalised service delivered with British class and refinement adds to the experience – I now know why Americans traditionally have British butlers. If you get the chance to fly first class on British Airways then you’re in for a special treat. Sit back, grab a glass of champagne and enjoy the flight.