I’m moving to Singapore, Some people are wondering why would I want to do that for? I currently live in sunny Sydney, with its beaches, cafe culture and sparking harbour,  to Singapore. A place that many would consider conservative, boring and strict. I’ve been met with a varying response when telling friends, some excited, but the most common reaction is bemusement. For those bemused perhaps their views of Singapore are somewhat out-dated – where Singapore was known for harsh punishments for minor offences and not being able to chew gum. For me, I’ve been 7 times in the last 3 years (as is evident by much of the posts on this blog), and it’s a city I fall more and more in love with each each visit.  Let me tell you why I’m giving up Sydney and moving to Singapore.

READ MORE: FIVE YEARS ON, DO I STILL LIKE LIVING IN SINGAPORE?

1. Singapore has a can do attitude and wants to be the best.

Check out this advertisement in the heart of Singapore CBD. I think this sums up the can-do feeling of the city.

Tiger Beer ad in Raffles Place. Says it all

When Singapore wanted to host a Formula 1 race, they didn’t just build a track on the outskirts of town. They instead created F1’s first night race through the city streets, and combined it with world class entertainment.  The night schedule is not just so they can have fireworks, It puts the race in the best time for European GP viewing and showcases the beautifully lit up city off the the world. 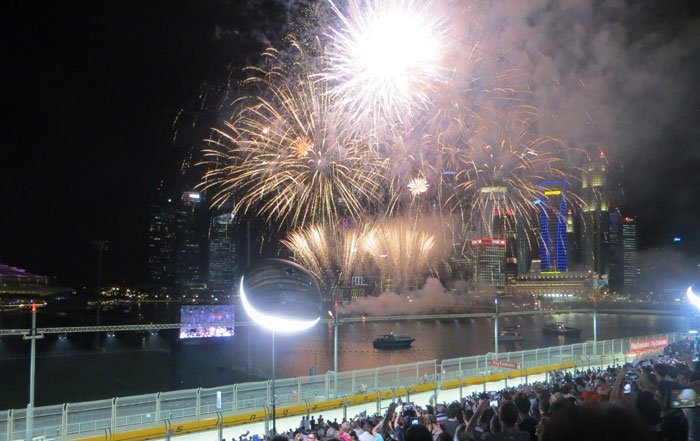 Fireworks to end a fantastic race

Check out their new national stadium that just opened – the closable roof is actually a giant screen that can display the game score or often just the Singapore flag.

They also built a casino with a certain swimming pool you might’ve heard of too. Singapore is taking it’s place on the global stage as a world city and that’s a party that I want to be invited to. 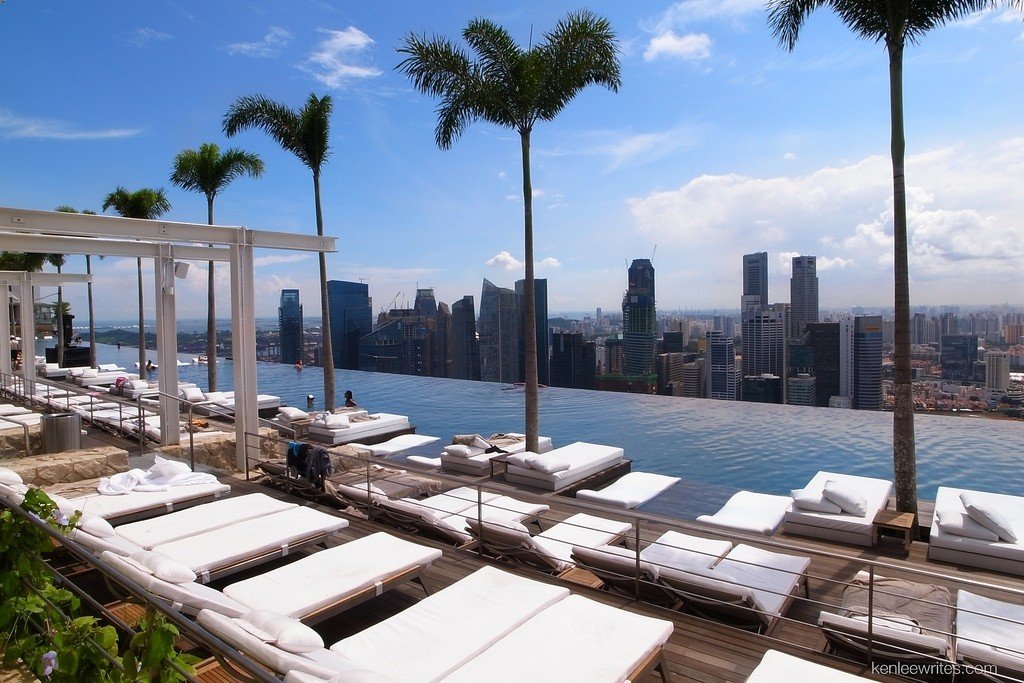 This is perhaps the most surprising thing that some of you might read. But as someone who has being going there multiple times in the past 5 years I can tell you this is one of the funnest places on earth.

Every Sunday you can get your groove on poolside or beachside at one of the many ocean side bars along East Coast Park or Sentosa Island. If you are heading into a pub on a night security meet you with a smile, not a quiz about how many drinks you’ve had,  and the concept of a 1am lockout in a 24 hour city is laughable (sorry Sydney) 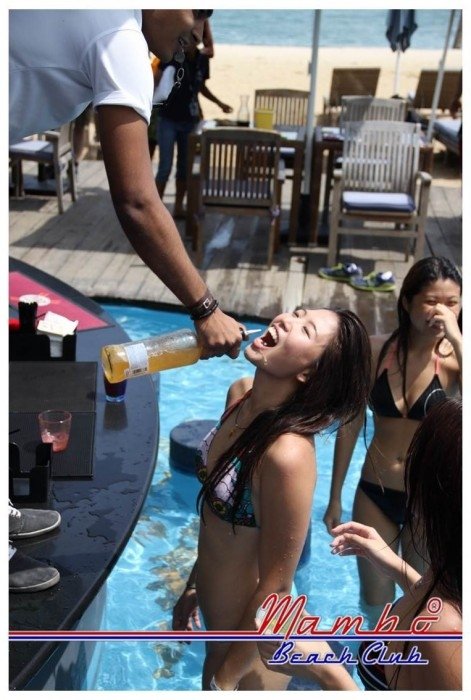 A pool party is a REAL pool party with people jumping in the pool and dancing. Unlike Sydney’s Ivy Pool Club where people stand with their backs against the wall too cool to get wet. In fact that built a floor over half the pool because it wasn’t getting used. 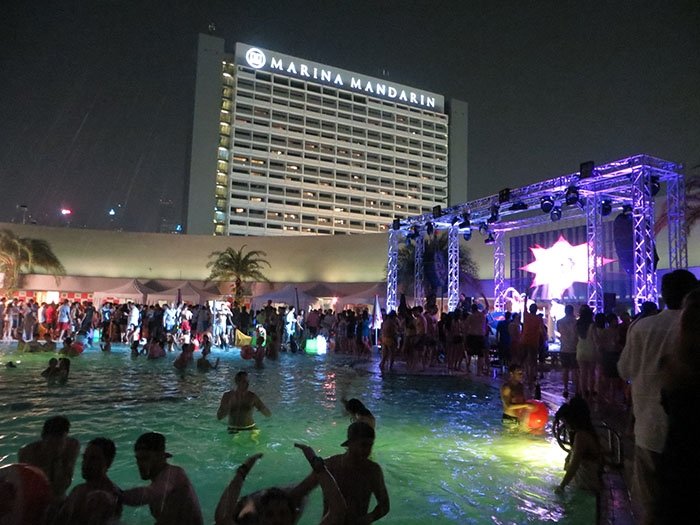 The desire to be the best that I mentioned before is everywhere with amazing small bars and cafes popping up all over the city that all have something unique and special about it. This might be the owner seeking out and selling rare craft beers or cocktails that even come with ping pong balls as part of the ingredients. Secret unmarked speak-easy type bars are also all the rage and get used to having truffles on your fries. There’s always something new and they are on the cutting edge. 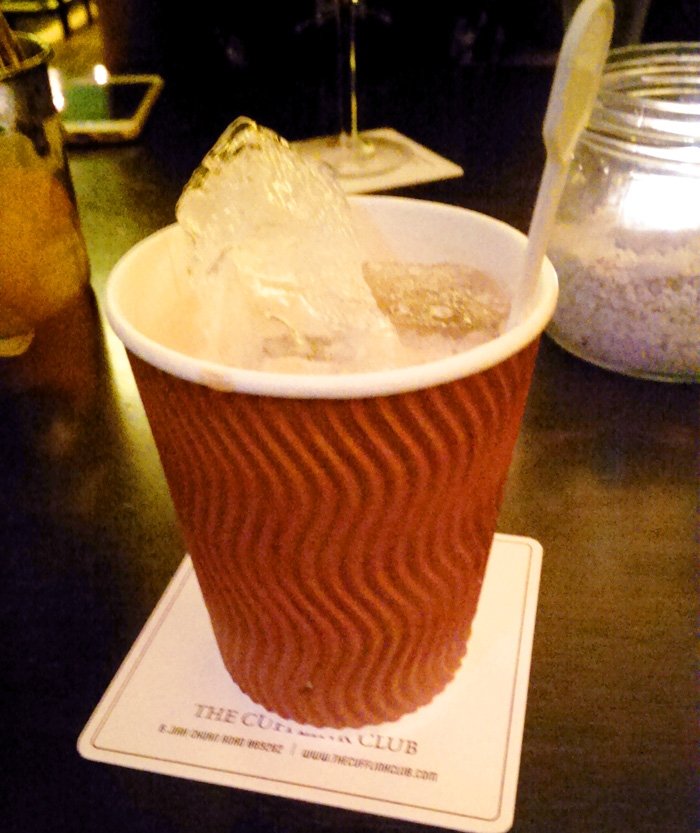 No douches, No bogans

This is what a music festival in Australia looks like.

I’ll also add in you will pay triple to cost compared to Europe / Asia and be served low strength alcohol drinks and bossed around by over zealous security. This is a large part because the scum of Australia is now attracted to festivals and regulations have had to be increased to keep them in line.

To be honest going to a dance festival in Australia now is so painful I will gladly pay $500 additional  to leave the country to attend one in a place with a more civilised crowd. Now being based in Singapore I don’t have to leave for a great festival anymore. ZoukOut is timed perfectly on the back of Australia’s Stereosonic so all those big names come to my town as well. Shirtless gorillas are noticeable less in abundance.. oh did I mention ZoukOut happens on a beach as well?. 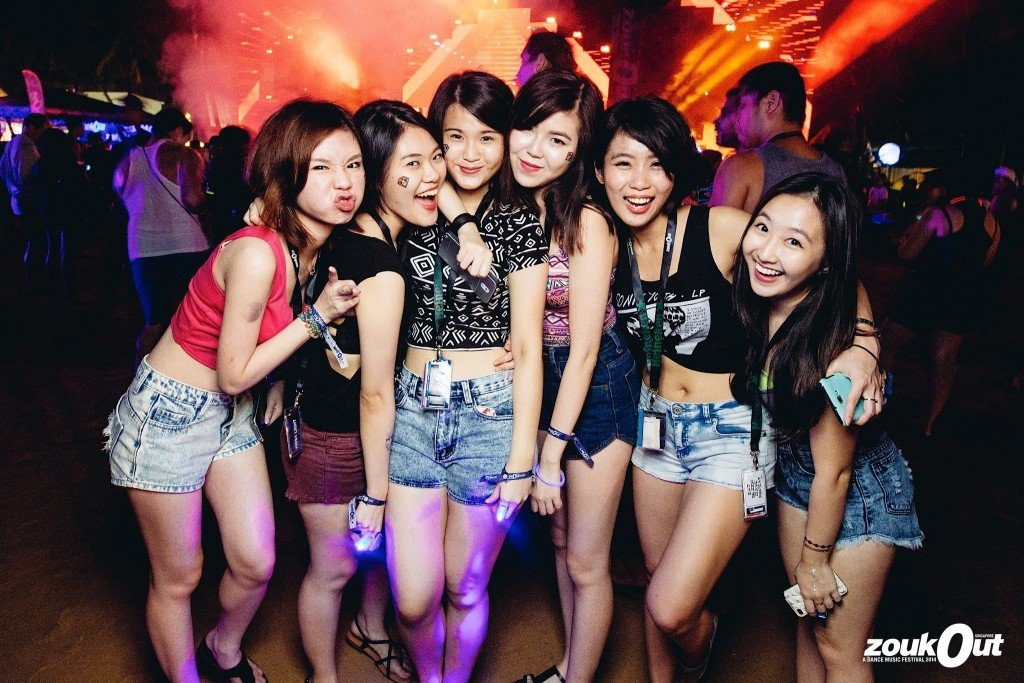 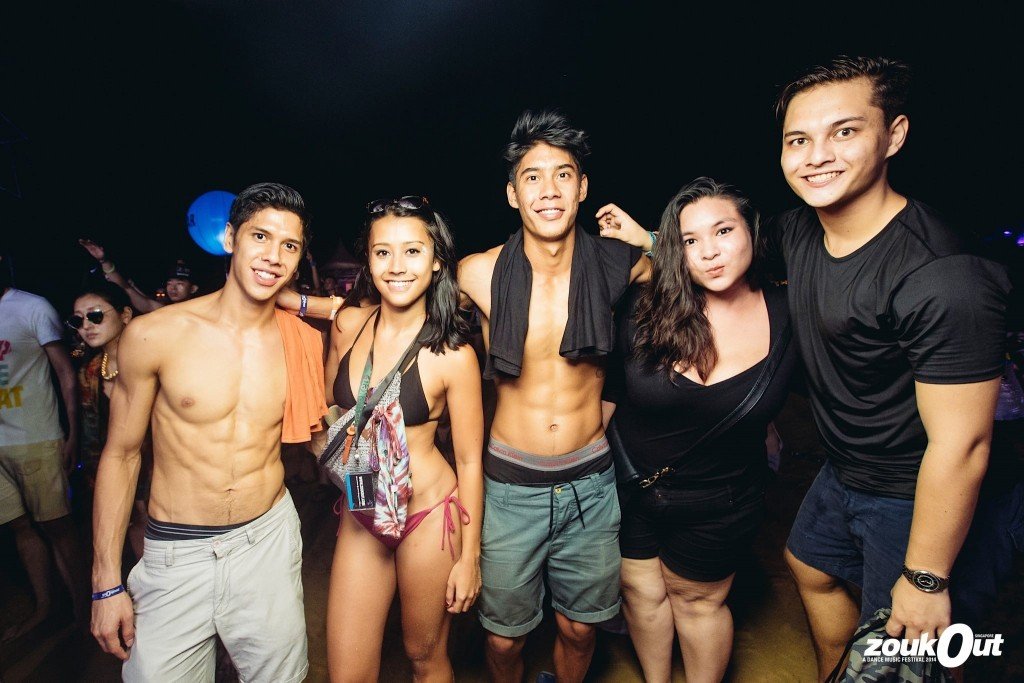 Compare to the Stereo pictures above.. who would you rather party with?

At almost 50 years old Singapore is a young country and had the chance to learn from other’s mistakes. They will do many things differently. Some are great, some suck, but ultimately they go into making it a more prosperous and enjoyable place to live for the population as a whole. The right to drive a car is expensive (many times more than the cost of the car instead). This keeps the roads clear and pollution down. Public transport is also cheap and accessible so for many a car is not required. Cars over 10 years old also can’t be driven on the road without paying an additional fee – another pollution saving initiative that also keeps the car industry booming despite having a limited market to sell too.

For most people, income tax in Singapore is 15%. If you are a Singaporean you will also have to contribute 20% to the CPF (Superannuation) that you get back when you retire or to be spent on your medical requirements. As I’m a foreigner I don’t have to make CPF contributions, which means my tax bill has more than halved compared to Australia. Tax is payable at the end of the financial year (not PAYG). So I can invest money set aside for tax and earn interest on it before payment is due. The CPF itself though this is a controversial policy with many locals unhappy that they are not able to access money they have fairly earned on their own terms. But the offset is a extremely financially secure country with much of the health and retirement needs of the nation looked after.

Close and cheap access to the rest of Asia

It is quite common for people living in Singapore to bring weekender bag with them to work on Friday morning. Then check out Skyscanner at lunch and book the cheapest flight to a near by location (I’ve seen as cheap as $15 to go to Malaysia, Thailand, Indonesia or Vietnam). Then head the airport straight after work. Something that’s unthinkable in Australia, even to domestic destinations. 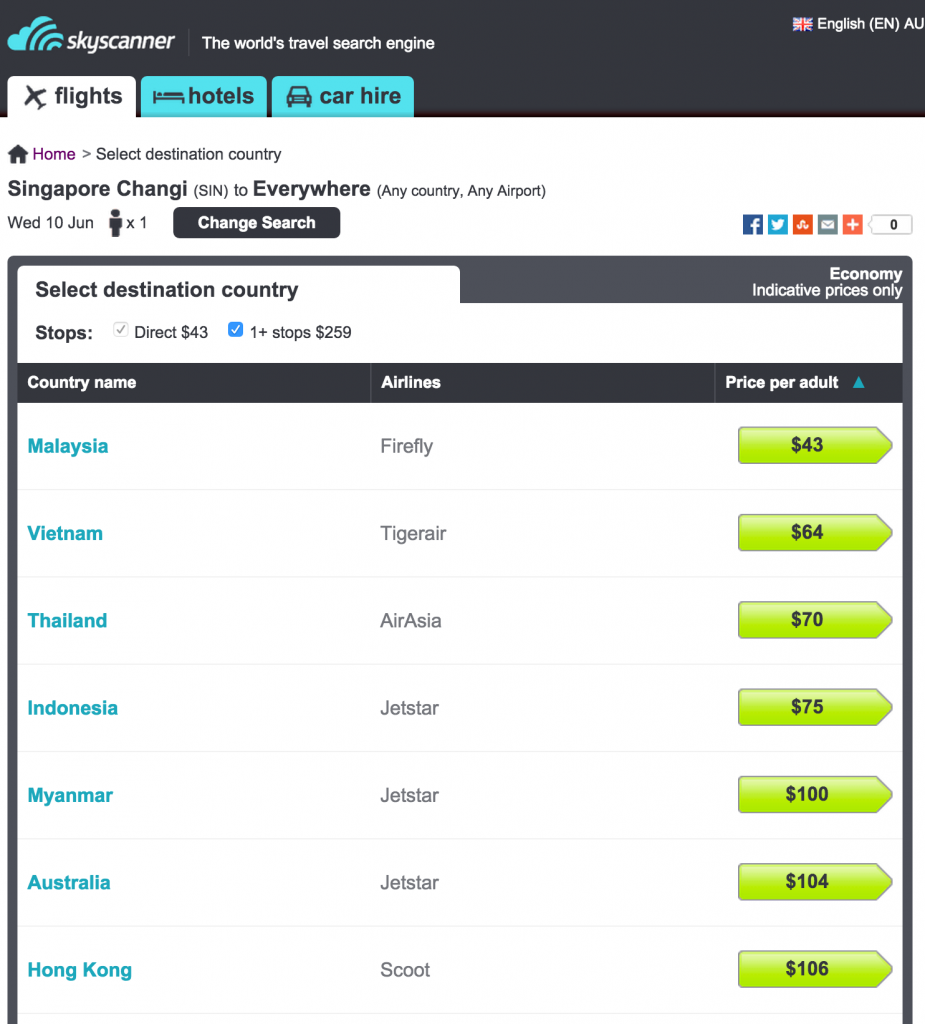 Cheap flights from Singapore to anywhere.. Why I’m moving to Singapore

Don’t forget there’s also road access to via Malaysia across the causeway or catch a short ferry ride to Indonesia for the day.

Rent is expensive enough to make your eyes water, or have to double check if someone put too many 0’s on your rental agreement by mistake. But you do get some pretty amazing facilities for your money. Many of the newer apartments have pools that you would ordinarily find only water parks. Some even with waterslides and islands. If a hot tub is more your thing head on up to the roof and soak in the view at the same time. You will also likely have a gym, tennis courts and BBQ pits at your disposal. 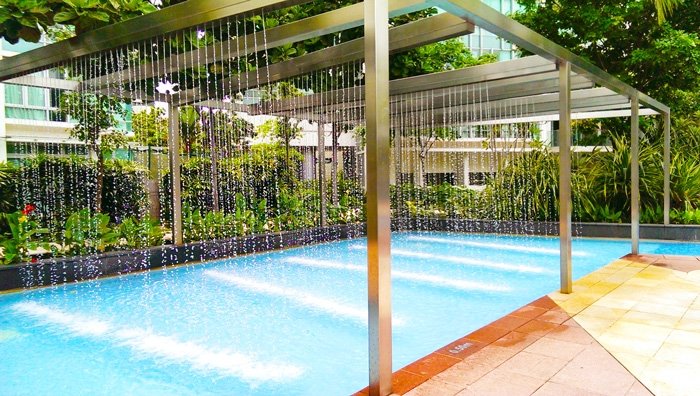 Shower pool at One Amber, Singapore 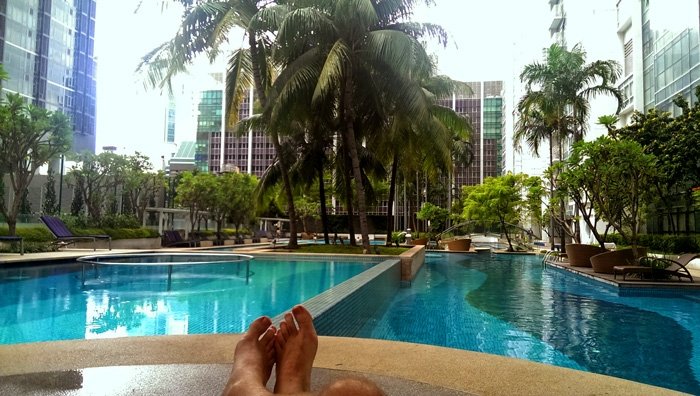 Chilling at the massive Icon Village pool – it’s more like a lake! 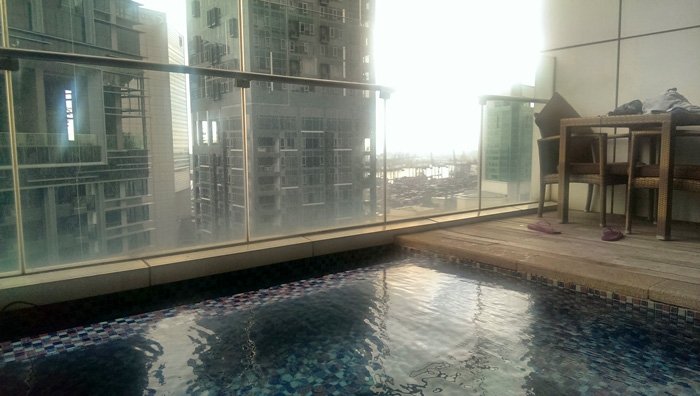 Hot tub on level 31? This is one of about dozen in the same complex 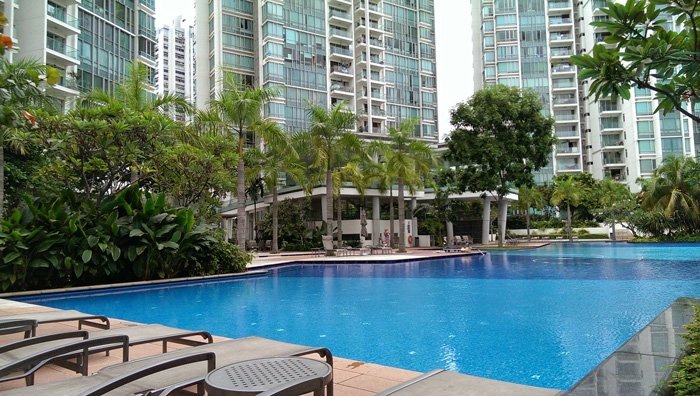 Expensive rent is countered by cheap, clean and efficient transport – including taxis both are a fraction of the price compared to my native Sydney, and also you can eat very well incredibly cheaply particularly at the neighbourhood hawker centres all over Singapore (more on these in the next section)

Next is the amazing food. Singapore has always been a mix of cultures which is no more evident in their food. A fusion of Malay, Hainan and Hokkien Chinese with Indian and even some European / British influence thrown in as well. Suburbs have been planned with hawker centres placed in the middle of neighbourhood. These open walled food courts are serving up fresh, authentic and cheap meals for around $3 – $7 just a few steps away from most peoples houses’. Why would you cook yourself? In fact many older houses don’t have kitchens precisely for this reason. 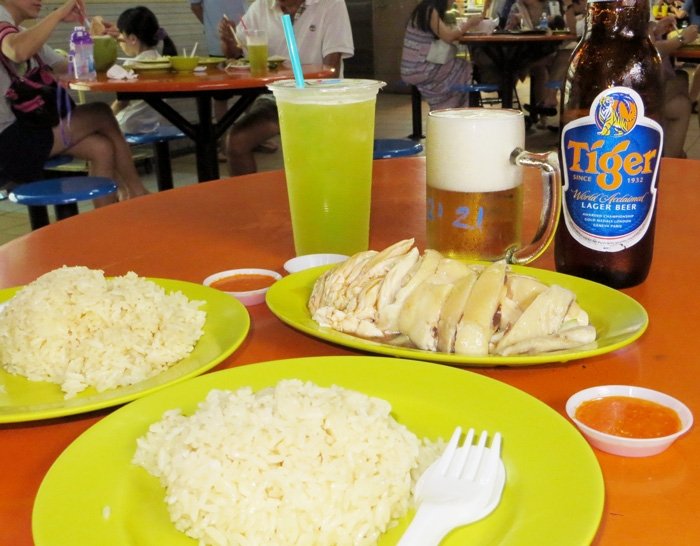 Singapore Chicken Rice, a typical hawker centre dish that you can get for $5 or below. The beer is more expensive than the meat!

So there you have it. The reasons why I’m giving up Australia for Singapore. Have I changed your perceptions of Singapore? or am I still crazy and making a bad decision. I’m keen to hear your thoughts below.

I’ll also revise this in 5 years, and see if I’m still as positive, or if the reality of daily living here has changed my mind and I’m looking to escape.