What’s it like to travel to North Korea via Air Koryo? An airline that until very recently was banned to fly in European Union airspace. An airline that has been rated worst in the world for 4 years in a row? Grab your boarding pass and check-in for a flight on Air Koryo – the national airline of North Korea.

To be honest catching the plane from Beijing to Pyongyang starts out just like any other international flight. You arrive at the less salubrious Beijing Terminal #2, go through the epic security and on to check in at the Air Koryo counter. It’s at this point the differences to a standard flight start to emerge. 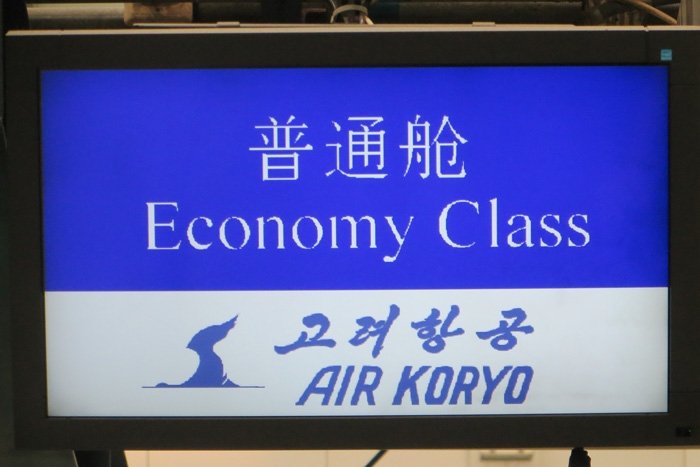 Time to check in 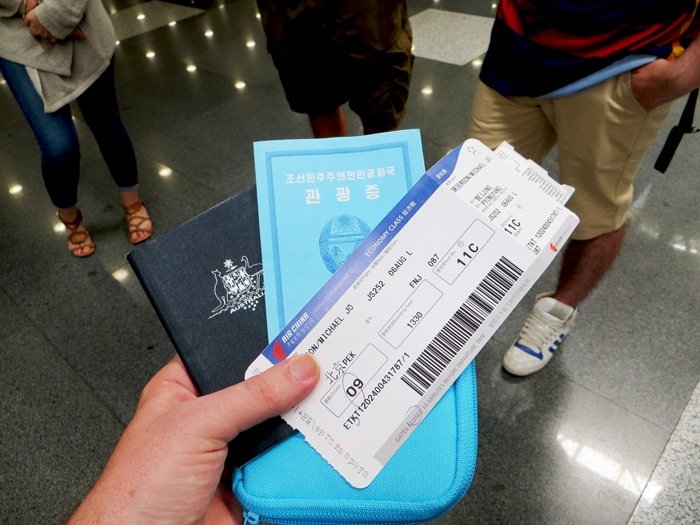 This is all you need to get into North Korea

Firstly people are wearing red badges of  Kim Il Sung and Kim Jong Il – “the great leaders” on their shirts or blouses. For me people wearing these is something I heard as a rumour, or perhaps only worn on formal occasions.  But there’s something about seeing it for the first time in such an ordinary environment that makes you stop and think –  “holy shit, I’m really going to North Korea”. The second difference is that all the North Koreans have loads and loads and loads of boxes to check-in. These appeared to be owners of high-end restaurants or traders bringing in some quality ingredients not available in Pyongyang, or perhaps they were just lucky to get a trip abroad and were bringing gifts and supplies for their very extended families.  There were also a couple of 50 inch LED flat screen TV’s being checked in as well. There didn’t seem to be any kind of luggage weight or bag limit and the plane was full, yet it was not uncommon for people to be checking in over a dozen pieces of luggage. 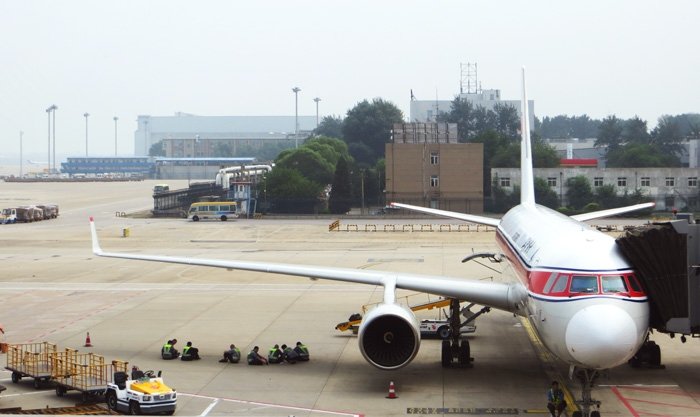 Despite what you might’ve heard about Air Koryo, the plane we flew on was actually very modern. But this wasn’t not your typical Airbus or Boeing. This was a Russian made Tupolev 204.These jets began service for the North Korean airline in 2008. Just like other early 21st century airliners, it has cool enhanced tips on the end of the wings, LED lighting throughout the cabin and LCD screens that retract down from the ceiling every few rows. 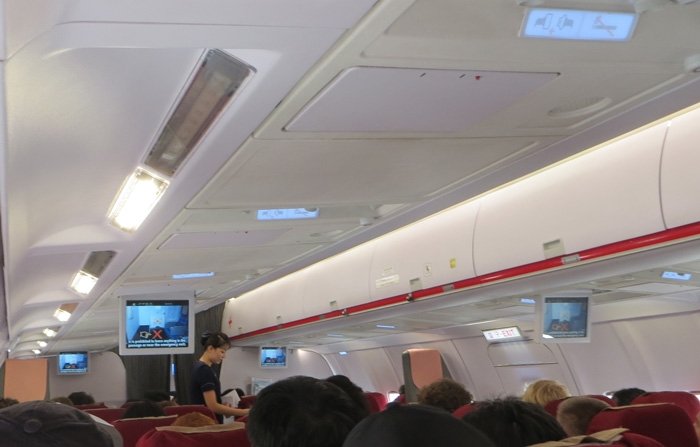 Air Koryo Interior. Just like any other plane really. Including safety video

Speaking of the screens, it wasn’t long before our in-flight entertainment began as the monitors flipped down from the ceiling showing an incredibly over produced concert from “North Korea’s #1 Girl Band” – The Moranbong Music Band. Rumours all over the internet claim these girls have been hand-picked by Kim Jong Un for their beauty and musical ability to inspire the nation. They sing songs with titles like “Let’s Study” and “Great Leader”. You can see a quick bit of the opening number below. I would describe it as a bizarre and fascinating mix of military tattoo, rock festival and Hillsong concert all rolled into one. Definitely not the worst thing I’ve watched on a flight, but perhaps the strangest.

If the concert is not your style, don’t worry there’s free newspapers and magazines available too. All publications were heavy laden with DPRK propaganda, to the point that it actually makes an interesting (if not comical) read. The fact that the year in the date was Juche 104 instead of 2015 was also an eye opener. 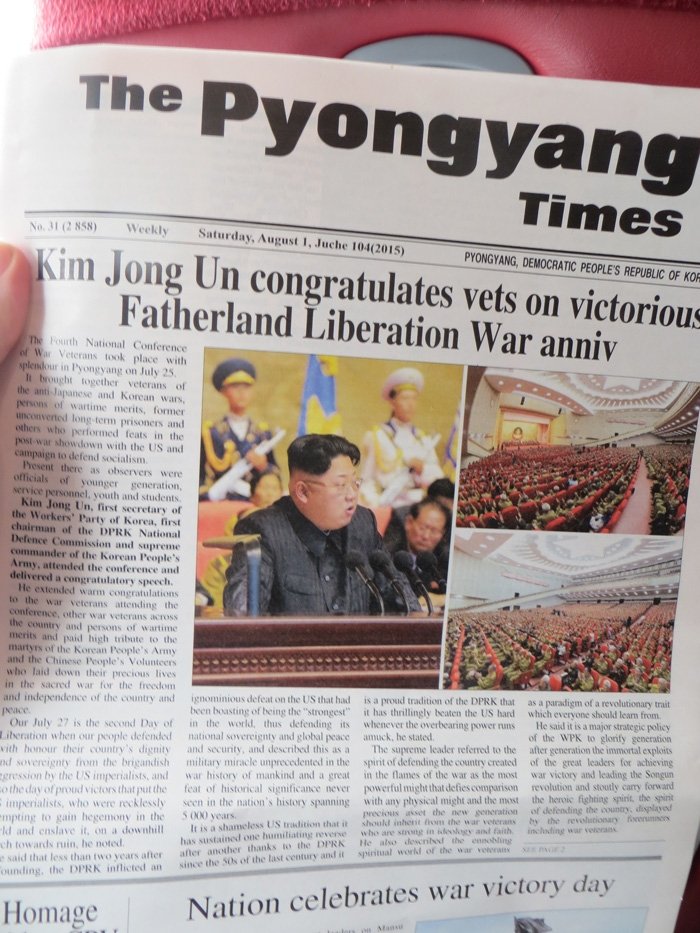 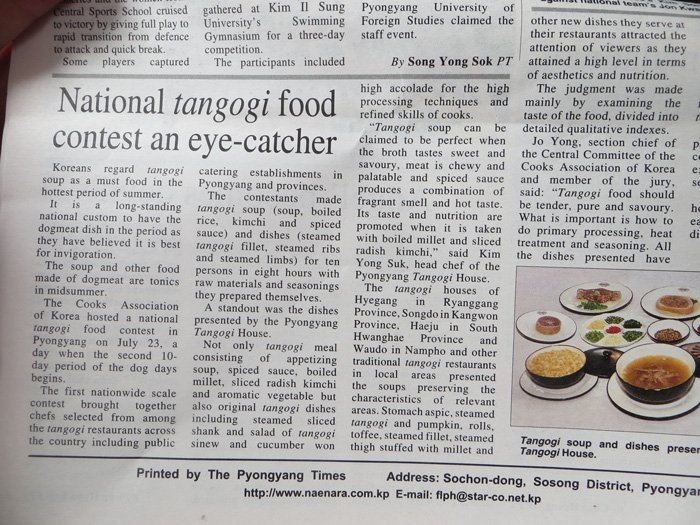 The flight was just under 2 hours from Beijing to Pyongyang, just long enough to get hungry. What would they be serving on Air Koryo? Would you believe a chicken sandwich and beer? 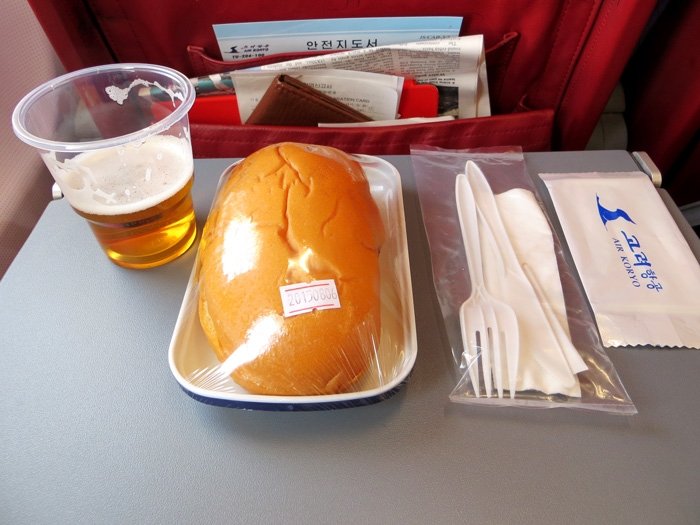 I personally wasn’t brave enough to try it, having loaded up at the airport before leaving with an expectation of bad food for the next few days (an expectation that later proved to be wrong). But those westerners who did try seemed to enjoy it, they especially loved the tangy mayonnaise.  The beer however was fantastic. The North Korean’s are master brewers – or they stole some master brewers from other countries – either way this was the start of a love affair with the beers of North Korea. 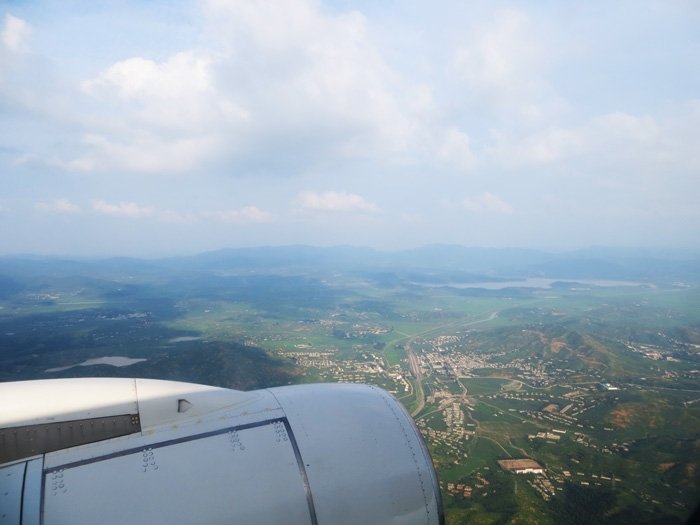 My first view of North Korea. This is approx 50km north-west of Pyongyang

Upon arrival the welcome is not as warm as the ones we received from our flight attendants when boarding the plane. While attempting to take a photo of the “Pyongyang” sign atop the airport roof a very military looking member airport staff was quick to say “no photos” and gestured me to put my camera away, it was a firm warning and there was no way I would take it out again before I had exited the airport.

What was impressive was the state of the airport – superb and spotless. Everything was neat and tidy and the grass impeccably mown. I mean you could have played snooker on this grass. This should be expected given the airport was less than 1 week old and we were amongst the first international flights to use it. 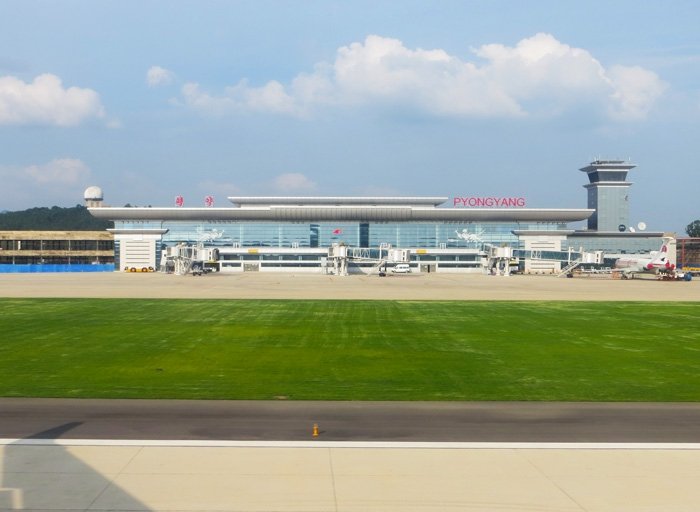 The brand new Pyongyang Airport. I wasn’t kidding about the grass 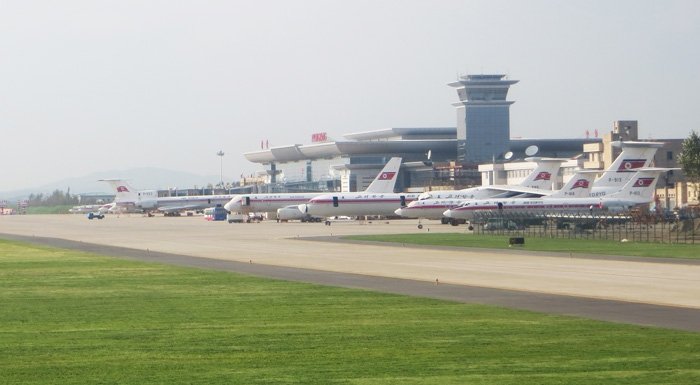 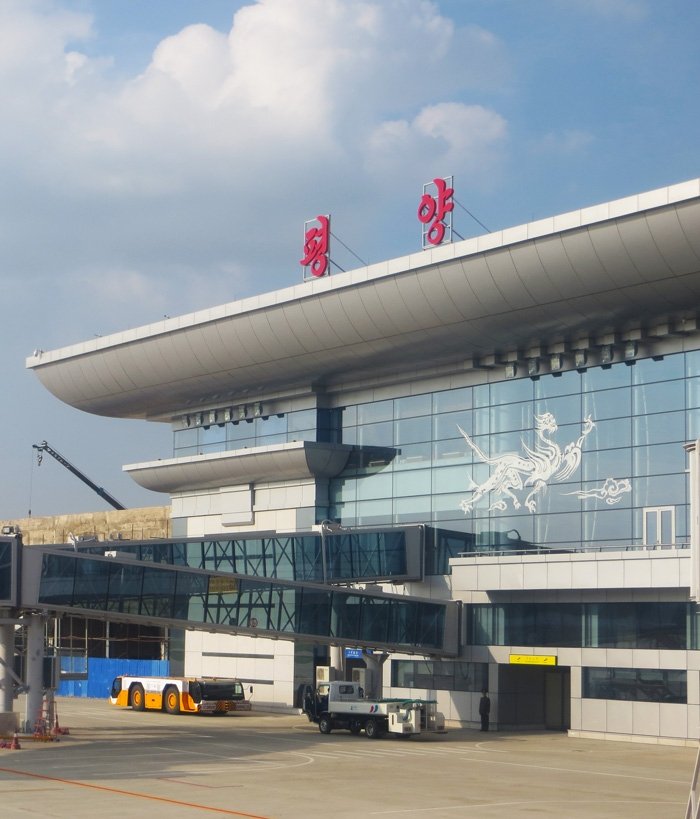 There were additional interesting characters in the queue for immigration and customs. Most were Korean families with the wives and mothers dressed in the latest high-end western fashion and the kids usually in matching outfits from brands like Puma or Adidas. The guards would stroll down the line conversing with these families just to check and see if everything was all right with them – further confirming my suspicions that these are people of high status and notoriety within North Korean society and likely well known to the airport staff. There was no stern faces or frowns here from the locals. Everyone was in high spirits and joking around. A total contrast to the foreigners like myself apprehensive and nervous about what awaited us when being interviewed by immigration and customs.

Like arriving in most countries you have to fill out an arrivals form. Unlike most countries you have to state if you are carrying a mobile phone, laptop, iPad or any other communications device. The guards will check this on your form then take you aside to check through all your devices to see if you have any type of media that is not welcome in their country. This is a pretty nerve-wracking experience – to have your electronics seized, switched on and then asked to enter your password so they can look around. You also do not know what will happen to you if they find something they don’t want you to have.

Thankfully it went smoothly. In my case the guard only wanted to check for movies (apparently ‘The Interview’ is not the comedy hit it was in the west). We were on our way with a big sigh of relief. Those that did have contra-brand were either asked to delete if it was a digital file it or told they could pick it up on their way out if it was something physical like a book. Some books were taken from other members in our group for DPRK being referred to as “North Korea”. Which is not the official title and therefore not permitted in the country. 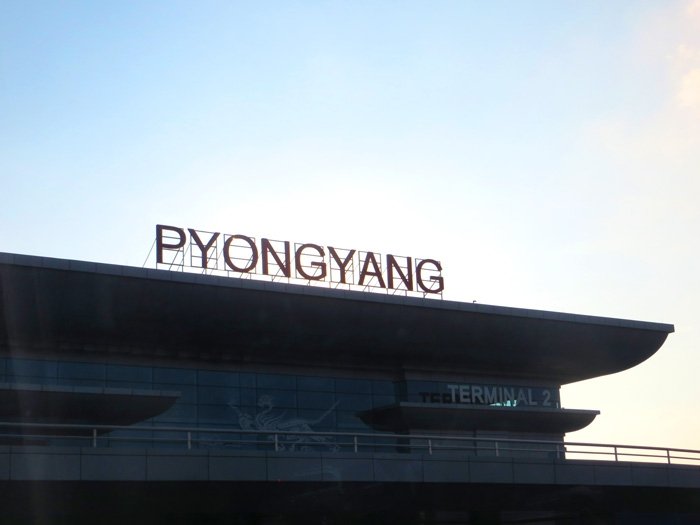 We met our Korean tour guides in the foyer and amazed to see how friendly they were and enthusiastic to show us their country. They went out of their way to make sure we were all comfortable. I spent about 15 min talking to one of the younger guides – Miss Kim- who was asking me about Australia and kangaroos (doesn’t every foreigner ask this about Australia?). She is also asking me what I know about North Korea – a question that I really felt uncomfortable answering as not wanting to offend her or commit any faux pas. She sensed this and began instead to talk to me about the history and demographics and that it is a split country. I think this was part of her “first day of the tour routine” with new groups as I witnessed her and the other tour guides ask the same questions and give the same response over the next 24 hours. Oh and they always talked about Korea as a whole (not North an South), and it was just unfortunate that they are cut off from the southern half of their country and people at this point in time.  They believe that they will be reunited again with the current DPRK regime in control.

Some rankings put Air Koryo to be the worst airline in the world. I would have to disagree. Granted, you won’t be getting any frequent flyer points, and flying the North Korean airline is like stepping back in time. But is that a bad thing? Free newspapers and magazines were handed out at the start of the flight. The attendants offered to take coats and hang them up for those passengers who needed it, and you could drink as much beer as you wanted. Little touches that are becoming rarer in the modern-day airline experience even on premium carriers.

I was looking forward to this flight as I knew it would be an adventure and an experience. But I didn’t expect it to be such a pleasant one. If you somehow end up flying Air Koryo, then do not fret. Instead take it as an opportunity to get a brief insight into the life of the North Korean upper class and experience an airline that does things its own way.